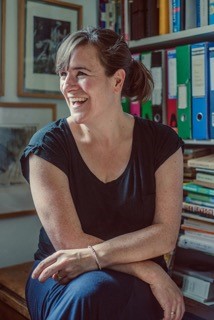 Morgan is a playwright and screenwriter.

Morgan was commissioned by The Globe to write Emilia which became a hit show in summer 2018 before transferring to the West End in 2019. It has been optioned for film and she is currently in development on this as well as several TV drama and comedy projects. She is also developing a book adaptation for film with Lucky Chap Films and adapting her play The Wasp into a screenplay for Paradise City Films. She is under commission for stage with Headlong and Clean Break.

Other stage work includes commissions for the Old Vic, Clean Break and Firehouse Productions. In 2013 she was chosen as a member of the Soho Six (Soho Theatre). She has co-written several acclaimed immersive site specific plays with Katie Lyons, produced by Look Left Look Right, including You Once Said Yes, Above and Beyond and Once Upon a Christmas. She was part of the writing team for four of the Lyric Hammersmith’s pantomimes from 2009-2012 and wrote (solo) the Bolton Octagon’s Christmas plays for 2013 and 2014.  She has written two large community plays for the Old Vic New Voices; Platform and Epidemic.

Please click here to purchase a copy of the Emilia playtext.

Under commission to Clean Break Theatre.

Hellscreen – produced at the Vaults Festival – Co-written with Rachel Parrish

The Many Whoops of Whoops Town – Look Left Look Right (with Katie Lyons) Play for 4 +, produced at Latitude and Lyric Hammersmith

Above and Beyond – Corinthia Hotel (with Katie Lyons) “Fun, adrenalin-arousing, and packed with lovely touches and little surprises – is magical” The Telegraph

You Once Said Yes – The Lowry Salford (with Katie Lyons)

Not Another Musical – Look Left, Look Right/Latitude (with Katie Lyons)

You Once Said Yes – Edinburgh Fringe Festival Original play produced, co-written with Katie Lyons Winner of a Fringe First and the Total Theatre award for Innovation and Experimentation “One of the great things about this show, besides its slippery, snake-like structure, is that it is constantly surprising – even when you think you’ve got the measure of it.” Lyn Gardner – The Guardian

Belongings – Hampstead Theatre Original play for Downstairs Theatre, 19 May – 11 June 2011, transferred to Trafalgar Studios June 2011 The Telegraph: “she writes with such lightness of touch and such depth of feeling that the evening never slackens its grip”  Nominated for Charles Wintour Most Promising Playwright Award (Evening Standard Awards)

The Apathists – Theatre 503 As part of a regular night Morgan produced a short piece for performance every month.

Emotional Midget – The Underbelly, Edinburgh Festival and Roscommon Arts Centre Written for the Polar Ducks in workshop and performed throughout the 2006 Festival.

The Boxes – Boxed Out Productions/Barons Court Theatre Commissioned play written in workshop. Chosen to be part of the Write Side Of The Brain New Writing Festival.

Starbucks New Voices 24 Hour Plays – Old Vic Selected to be part of the New Voices programme with work produced at the Old Vic.

Maybe We Could…? – Pleasance/Edinburgh Fringe Co-wrote and performed in comedy with Trippplicate.

Fanny and Madge – Gilded Balloon/Edinburgh Fringe Wrote, performed and produced in comedy 2 hander. The play transferred to The Old Red Lion in Islington for a three week run in 2003.

Morgan has numerous commissions for short plays and corporate work.

For further details on these projects please contact Georgina Ruffhead.