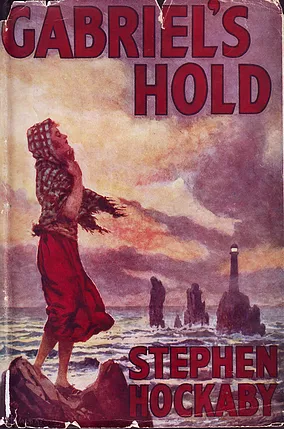 On the large rock named Gabriel stands a solitary lighthouse. The rock and its tower is buffeted unceasingly by the sea’s crashing waves, and it is to this outpost that Robert Kegan is assigned. The tall, strong Kegan meets the other lighthousemen that he will come to know well: Erik Roomis, a jovial veteral sailor with a newlywed wife on shore; Neil Iver, a sullen Scotsman who nurses a grudge against Roomis; and Patrick Kerry, an older family man who acts as peacekeeper when needed. Mostly, though, the men have all they can do to keep the lighthouse functioning in the oft-severe coastal weather. Birds, blinded by the light, sometimes fly into the glass panes and shatter them; snow can block the light’s beam, and the outside panes must be monitored and cleaned. Then there’s interior maintenance, from winding the weights that revolve the light to cooking and housecleaning duties. Further, each night one man must be on watch to alert any ships which might be straying too close to Gabriel, or towards the deadly neighboring rocks Michael and Lucifer.

Three men must stay at the lighthouse while the fourth takes leave. Quitting the rock is no easy prospect, and often the men must wait for the weather to accomodate before a boat can attempt a leeward landing. The keepers’ personalities come through when they visit family and friends on shore. Iver pines for his Scottish village of Eilean an Tarbh, while Kegan spends his time with his mother and younger siblings. Kerry, on his leave, returns to his wife and his garden, and Roomis waits out his wife’s delivery of their first child while serving duty on Gabriel. But even as each man looks forward to his leave, the call of the sea and the lighthouse haunts his thoughts and troubles his dreams. It is under the scrutiny, and in the service, of Gabriel’s light that each man will prove his worth–as hero, coward, or mortal.