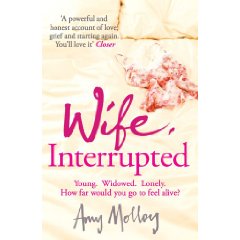 Amy met the man of her dreams whilst on a gap year in Australia. Less than a month later he proposed and she accepted. But within twelve months he was diagnosed with terminal cancer and though they were able to marry he died just three weeks later.

You’d never guess she was a widow at 23. She’s learnt to hide it well. Because what choice do you have when you’ve lost the love of your life almost as soon as you found him? The way Amy saw it, there were only two options…

A) Dress in black, become a recluse and watch your wedding video on a loop

B) Decide falling in love again is out of the question and choose an easy, uncomplicated alternative – sex…

Funny, powerful, and painfully honest, Wife, Interrupted examines the complicated process of grieving – and proves that sometimes the most unthinkable things can be the most comforting.

‘This moving, warts-and-all real-life story of a young woman’s crippling bereavement and her desperate attempts to move on is heartbreaking – but manages to be hopeful and optimistic at the same time’ – Heat ****, No.4

‘This is the painfully frank true story of how Amy coped with losing her husband Eoghan. Her journey through love, loss and starting again, via a series of one night stands, is as inspiring as it is heartbreaking’ – News of the World *****

‘A powerful and honest account of love, grief and starting again, it’s moving and sad, but also surprisingly funny. You’ll love it’ – Closer ***

‘Wife, Interrupted is a moving page-turner about a woman widowed at 23. An ideal beach read’ – Daily Mail