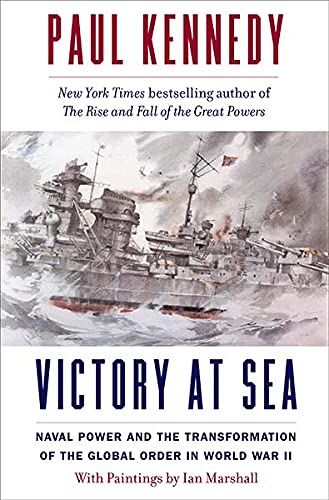 “A brilliant and gripping book by a master historian working at the top of his powers”―Fredrik Logevall, Harvard University

“Paul Kennedy has written a classic in this sweeping narrative account of the desperate struggle to command the seas and America’s rise as a superpower during the Second World War”―John H. Maurer, US Naval War College

In this engaging narrative, brought to life by marine artist Ian Marshall’s beautiful full‑colour paintings, historian Paul Kennedy grapples with the rise and fall of the Great Powers during World War II. Tracking the movements of the six major navies of the Second World War―the allied navies of Britain, France, and the United States and the Axis navies of Germany, Italy, and Japan―Kennedy tells a story of naval battles, maritime campaigns, convoys, amphibious landings, and strikes from the sea. From the elimination of the Italian, German, and Japanese fleets and almost all of the French fleet, to the end of the era of the big‑gunned surface vessel, the advent of the atomic bomb, and the rise of an American economic and military power larger than anything the world had ever seen, Kennedy shows how the strategic landscape for naval affairs was completely altered between 1936 and 1946.