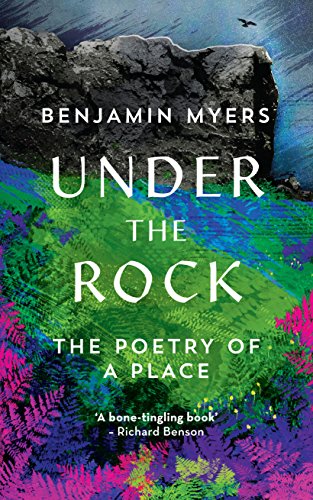 Under the Rock: The Poetry of a Place

Carved from the land above Mytholmroyd in West Yorkshire, Scout Rock is a steep crag overlooking wooded slopes and weed-tangled plateaus. To many it is unremarkable; to others it is a doomed place where 18th-century thieves hid out, where the town tip once sat, and where suicides leapt to their deaths. Its brooding form presided over the early years of Ted Hughes, who called Scout Rock ‘my spiritual midwife . . . both the curtain and backdrop to existence’.

Into this beautiful, dark and complex landscape steps Benjamin Myers, asking: are unremarkable places made remarkable by the minds that map them? Seeking a new life and ­finding solace in nature’s power of renewal, Myers excavates stories both human and elemental. The result is a lyrical and unflinching investigation into nature, literature, history, memory and the meaning of place in modern Britain.

‘A bone-tingling book’ — Richard Benson, author of The Valley and The Farm

“Extraordinary, elemental … never less than compelling: this is a wild, dark grimoire of a book” – The Times Literary Supplement

‘The writing is perfectly poised and seductive, luminous, an earthy immersion into the granular dark of place. The prose has an intense, porous quality, inhabiting the reader right from the stunning start with the voices of rock, earth, wood and water. This is a truly elemental read from which I emerged subtly changed. The writing has a shamanic quality; Benjamin Myers is a writer of exceptional talent and originality … it has all the makings of a classic‘ — Miriam Darlington, author of Otter Country and Owl Sense

“Compelling … admirable and engrossing. Myers writes of the rain with a poet’s eye worthy of Hughes” – Erica Wagner, New Statesman

‘One of the many joys of Under the Rock – this absorbing, compelling, moving book – is its language; it trickles like a rivulet, thunders like a cataract, and sticks to you like mud. It is full of crannies and dips and peaks wherein wonders hide; explore it for a lifetime and you will not exhaust its mysteries. Unafraid of blood-drenched history and the darkest of despair, this is nonetheless a defiantly life-praising book; it accompanied me to bed and bar, train and plane, and each situation was enriched and brightened by its presence… . It is utterly vital‘ — Niall Griffiths, author of Grits, Sheepshagger and Stump