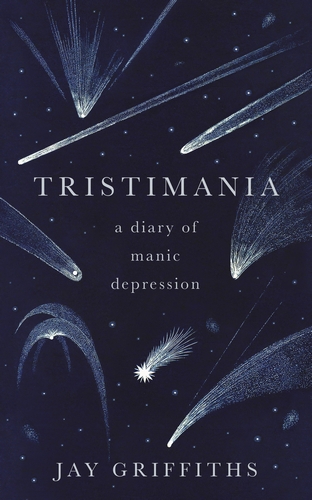 Tristimania: A Diary of Manic Depression

There are galaxies within the human mind, and madness wants to risk everything for the daring flight, reckless and beautiful and crazed. Everyone knows Icarus fell. But I love him for the fact that he dared to fly. Mania unfurls the invitation to fly too high, too near the sun which will melt the wax of the mind, and the fall will be terrible. Tristimania is an old term for manic depression, precisely capturing that sense of grief and hilarity, of violent sadness and mad highs.

From the award-winning writer Jay Griffiths comes a powerful and intimate depiction of a manic-depressive crisis. The episode included hallucinations, numerous visits to the doctor and medications that would take over her life for an entire year, culminating in a long solo pilgrimage across Spain.

Bringing readers directly into the heart of a manic-depressive episode, Tristimania is unusual in recording the experience of mania: as Griffiths writes, “When your mind is in flight, you don’t leave tracks on the ground so there are no prints, neither footprints nor printed letters on the page. But I felt fiercely that I had to take notes… to mark the tracks of its passage.” The book shows both the savagely destructive powers of this condition and yet also its magnificent creativity, as Griffiths uses her own journey to illuminate something of the universal human spirit, illustrating how Shakespeare offers clues to this condition, and exploring the mercuriality of manic-depression through the figure of the Trickster in the human psyche.

‘One of the most perceptive and lyrical writers working today, with deep learning and immense moral courage. Tristimania is a triumph in every sense ’
John Burnside, Book of the Year, New Statesman

‘Griffiths is a profoundly poetic writer . . . [Tristimania] will become part of the necessary and continuing conversation around mental illness . . . [It] offers readers the possibility of hope ’ Observer New Review

‘Art and madness have always shadowed each other. Tristimania traces the shadow to its source and watches as it grows long. This is one of the bravest books I’ve read in a long time ’ Paul Kingsnorth, author of The Wake

‘A movingly honest dispatch from the depths; startlingly open, taut with insight . . . A high-wired praise song to friendship, vocational compassion and to the psyche ’s own resilience in extremis’ Gareth Evans

‘A book of terrible beauty; a dazzling testament to the moral and literary power of brokenness. I cried, shivered, and then laughed in gratitude for Griffiths’ sheer bloody nerve ’ Charles Foster, author of Being a Beast

‘Griffiths invites us to follow her down the rabbit hole of the human mind . . . Her unique gifts of language and wit are utterly captivating’ Nikolai Fraiture, The Strokes