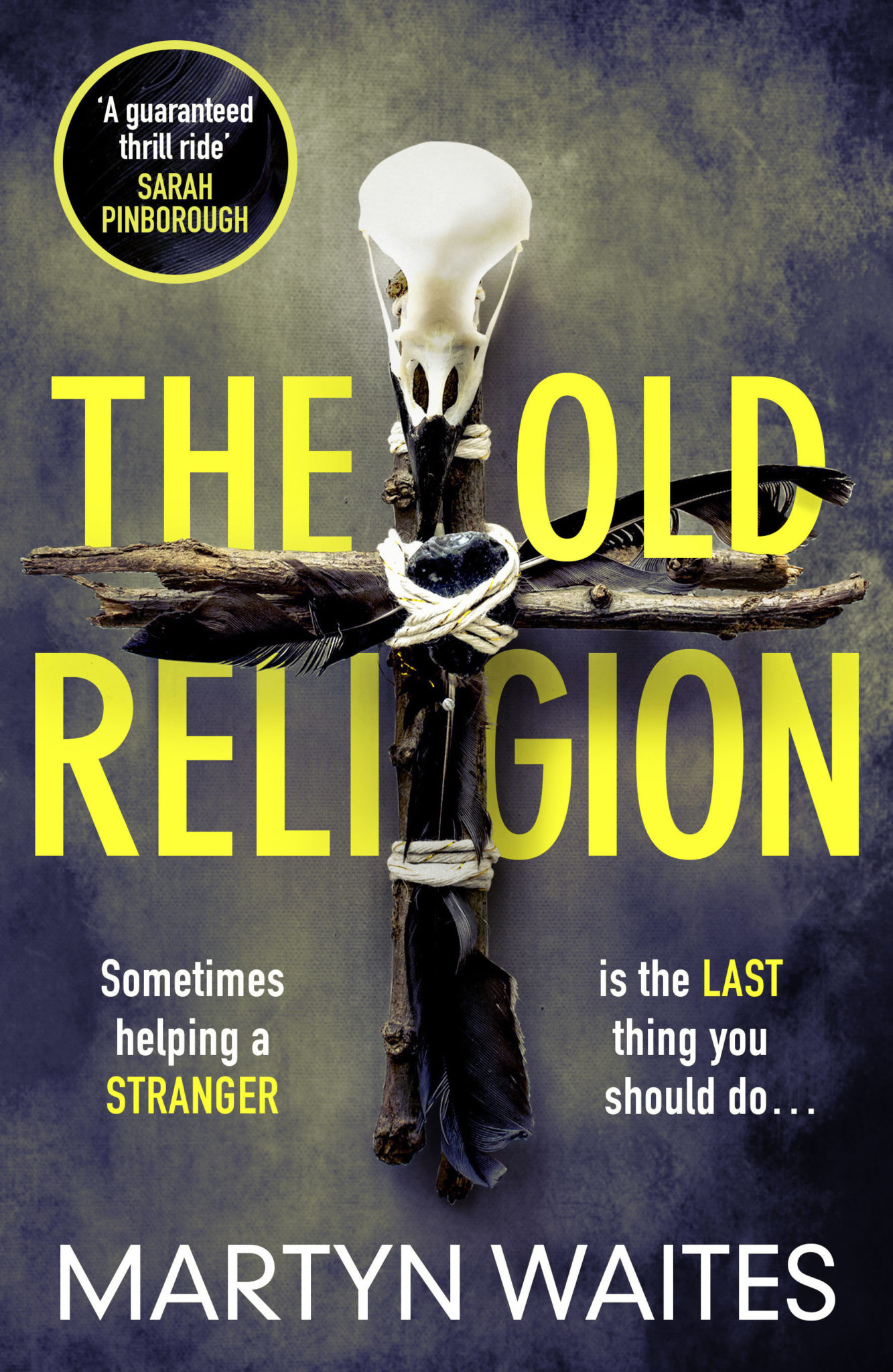 For fans of Peter May and Ann Cleeves comes a new thriller featuring ex-undercover police officer Tom Kilgannon. Welcome to the dark heart of Cornwall . . .

The Cornish village of St Petroc is the sort of place where people come to hide. Tom Killgannon is one such person. An ex-undercover cop, Tom is in the Witness Protection Programme hiding from some very violent people and St Petroc’s offers him a chance to live a safe and anonymous life.

Until he meets Lila.

Lila is a seventeen-year-old runaway. When she breaks into Tom’s house she takes more than just his money. His wallet holds everything about his new identity. He also knows that Lila is in danger from the travellers’ commune she’s been living in. Something sinister has been going on there and Lila knows more than she realises.

But to find her he risks not only giving away his location to the gangs he’s in hiding from, but also becoming a target for whoever is hunting Lila.

A dark, twisted, fast-paced and literate page-turner that is ultimately redemptive, The Old Religion is a contemporary British rural crime thriller that combines the deft plotting, evocative landscapes and imagery of Peter May with the richness of character and psychological acuity of Belinda Bauer’s rural novels. Most surprising of all, it is based on a true story. 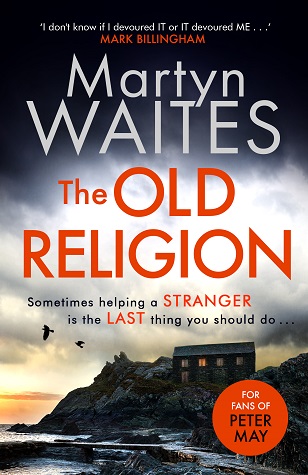 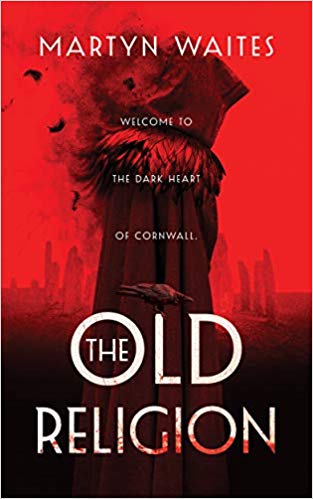 ‘With a brilliant cast of characters, some very fast-paced action and a tense, well-crafted plot, this thriller keeps you captivated.’ Sunday Mirror

‘A strong plot, a formidable air of menace and the avoidance of hillbilly horror cliché add up to a superbly executed cautionary tale about the malevolent force of parochialism.’ Laura Wilson, The Guardian (Books of the month)

‘We are definitely in Wicker Man territory here, but leave your ‘I’ve already seen this/read that’ cynicism at the door because Martyn Waites’ excellent new thriller still managed to keep us on edge even while it was scattering all the folk horror tropes around like nine-pins. If you’re a frustrated crime/horror author scrabbling for the next great idea, you’re going to love this and hate this in equal measure – love it because it’s brilliantly written with a plot that flows like daemonic clockwork, hate it because it’s such a brilliant twist to an old idea you’ll be jealous you didn’t think of it first. Tom Kilgannon is a terrific protagonist with enough backstory for a whole coven of twisted follow-ups (assuming he survives this initial adventure, of course), and the way Waites combines the anger and unrest of Brexit Britain with the dark ritualism of ancient pagan belief is pretty much genius. Yes, we know it’s been tried before but it’s rarely, if ever, been done this well.’ Starburst

‘The storytelling is strong throughout, and as the two unstoppable forces of Tom Killgannon and Morrigan are drawn onto a collision course there’s no way you’ll be able to put The Old Religiondown until all is resolved.’ Crime Fiction Lover

‘Deeply unsettling and hauntingly realistic, The Old Religion takes all the things I love in a book and smashes them together – hard.’ Susi Holliday

‘A chilling slice of contemporary folk horror that will make you think twice before venturing into that friendly looking Cornish pub.’ Mark Billingham

‘Waites brings all his storytelling talent and experience to this chilling tale, with results so spectacular I might never go to Cornwall again. Superb’ Lee Child

‘A joyous new series with an adorable hero. Waites has come thundering back with all his talent intact’ Alex Marwood

‘Martyn Waites is already crime fiction royalty. With The Old Religion he has delved into the fears and hearts of disillusioned Britain. Tom Killgannon is one of the best new characters in modern fiction. I bloody loved this book’ Steve Cavanagh

‘A compulsive and creepy crime novel, The Old Religion is brilliantly atmospheric and original. It’s one of those books you keep saying to yourself – just one more chapter – and then realise you’ve been up all night. One of the best books I’ve read this year’ Stav Sherez

‘This is a great read – dark and disturbing, like The Wicker Man reinvented for our own troubled times. This is the side of Cornwall you’d rather not see – full of sinister undercurrents – but the result is a novel that’s gripping from the first page to its incredibly satisfying climax’ Kevin Wignall

‘A twisting, atmospheric, scary tale that delves into Cornwall’s dark side – ancient and modern – to introduce a terrific new character in troubled cop-in-hiding Tom Killgannon. You won’t be finding this one on the Cornish Tourist Board’s reading list . . .’ Anya Lipska

‘The Old Religion is authentically spooky, thrillingly atmospheric and unnervingly relevant. It reads like The Wicker man for the Brexit era.’ Chris Brookmyre

‘The Old Religion is one of those books you start reading and feel it envelope you like a second skin, meaning you can’t put it down. Deliciously creepy, with a startling evocation of that scary old village with hidden secrets vibe. I loved it. Every word. Superbly written, creepy as hell, and chilling to the bone. I can’t recommend it highly enough!’ Luca Veste

‘Martyn has written another raw, deftly-plotted thriller with a dark heart and a real emotional punch’ Simon Kernick

‘Reading Martyn Waites is a guaranteed thrill-ride. His characters sing off the page, his plots keep you guessing until the end, and I always read his books in a day. So grab The Old Religion and make Martyn Waites your new religion!’ Sarah Pinborough

‘The Old Religion is Martyn Waites at his dark and chilling best, a landmark work of rural noir which tears apart the countryside idyll and exposes just how twisted its bones really are’ Eva Dolan

‘The master of sinister. Prepare to be creeped out’ Angela Clarke

‘I LOVED The Old Religion. I adored the tense, taut prose punctuated with lyricism; the dark and twisting plot; the dance between the main characters’ A. K. Benedict

‘Dark, chillingly atmospheric and thought-provoking, The Old Religion explores the insidious power of mob mentality, but also the desperation of those who have nothing. But this is also a page-turning thriller, with an extraordinary cast of characters, and a plot that races along. Highly recommended.’ Back to the Books

‘The Old Religion by Martyn Waites does for Cornish tourism what Peter Benchley and Jaws did for swimming in the sea! The Wicker Man meets Get Carter in a tale that straddles both contemporary crime and folk horror to form something entirely unique. This is a terrific book that one hopes will form the basis of a series with Tom Killgannon at the fore’ Stuart Neville