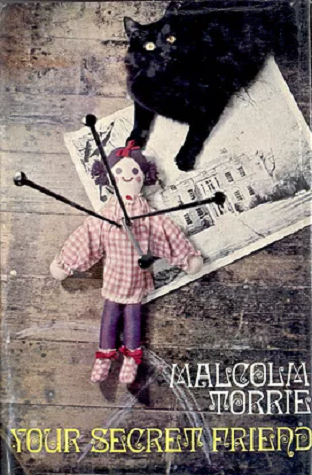 Alison Marchmont Pallis, an attractive and headstrong mistress at a girls’ school, has decided to lay down her kit and become a homeowner. With rather tenuous financial help from fellow teacher April Bounty, Alison purchases a large stone farmhouse estate called Little Monkshood. April suggests that they contact her cousin, Timothy Herring, to see if his Society for the Preservation of Buildings of Historic Interest might be able to help them renovate the house. Timothy makes Alison’s acquaintance, and also learns that she is in a relationship with Simon Bennison, the school’s music master. PHISBE agrees to help restore Little Monkshood, and shortly thereafter (and of no surprise to her cousin) flighty April decides not to buy into the estate, leaving Alison with the large farmhouse and accompanying mortgage.

​
April also manages to make enemies with Sandra Davidson, an ambitious student intent on forming a witch’s coven with her friends. (April unwisely refers to the befreckled girl as “Cuckoo Egg.”) The girls sneak over to the nearby house and perform a spell to curse the insulting teacher. The spell may have missed its target, however, as no harm appears to befall April Bounty. Later, Simon and Alison celebrate their housewarming with a bottle of wine, which happens to be laced with poison. Timothy arrives at the farmhouse to find Alison terribly ill and Simon dead in the solar. Unless the incident was a murder-suicide attempt on the part of the unhappily married music teacher, Timothy reasons, only one person carries a motive strong enough to wish the lovers dead. As Timothy oversees Alison’s recovery, he spends the rest of his time building a case against the culprit.