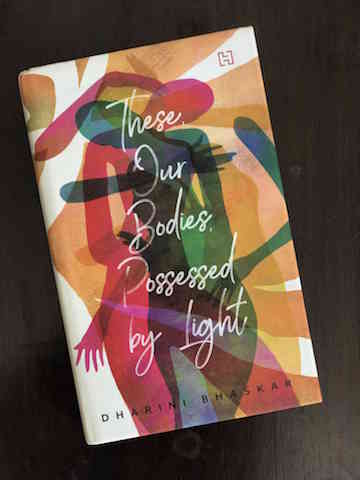 These Our Bodies Possessed by Light

Bhaskar chooses a line from Silken’s poem: “These, our bodies, possessed by light” to be her title. A line sandwiched between the idea of ruined love and acceptance.

Amamma never finds her true love, who was taken away from her when she was sixteen. Mamma believes she has found her true love, until he leaves her. Dee’s sister Ranja, married to a man with acclaim and stability, goes insane, her personality scooped out and replaced with dinner plates and domesticity. Her other sister Tasha, who shifts from man to man, finally settles on one and decides to get married, leaving Deeya feeling ominous and unsettled. Deeya herself is irrevocably in love with an older, inaccessible man. She is married to another, who spends most of his life at sea, while she lives in America all alone with sorrow and loneliness. If Bhaskar sees redemption, or light at all in her story, it is in the idea of story-telling itself. That bodies are held together by memories and that memories can be tweaked and tucked into suitable corners as per the body’s desire.

These our Bodies Possessed by Light is shortlisted for the JCB Prize https://scroll.in/article/974017/jcb-prize-deepa-anappara-samit-basu-dharini-bhaskar-s-hareesh-annie-zaidi-make-the-shortlist