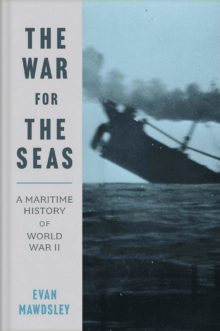 The War for the Seas: A Maritime History of World War II

A bold and authoritative maritime history of World War II which takes a fully international perspective and challenges our existing understanding.

The battle for control of the seas was crucial to determining the outcome of the Second World War. But how, facing the supremely effective German war machine, could Britain, the US and their allies successfully block the enemy at sea?

In this authoritative and richly detailed account of wartime sea power, Evan Mawdsley traces events from the first German U boat operations in September 1939 through to the surrender of the last U boats in May 1945. Covering all the major battles in the Pacific and the Atlantic oceans, War for the Seas surveys the efforts of sea powers both major and minor, including the British Empire, United States, Japan and Germany as well as France, Italy and the Soviet Union. Mawdsley discusses the role of individual leaders, technical competition and change, and logistics and intelligence and provides a host of new insights into the epic struggle to defeat the Axis powers.