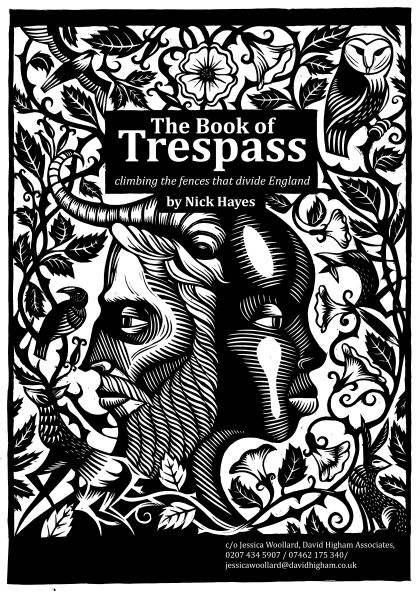 The Spellbound Land: trespassing the lines that divide us all

Occupying a space somewhere between Owen Jones, George Monbiot, Roger Deakin and Robert Macfarlane Hayes uses brilliant, funny nature reportage, history and philosophy to write a polemic that examines in forensic detail, who, exactly, owns the land. He takes us on a journey through England trespassing it all, from the Queen’s land at Windsor to Downton Abbey.

Hayes’ premise is that a wall is a metaphor made manifest, representing the division of society but also causing it. A wall looks like order but more often than not, it stands at the fulcrum of an imbalance in society. He questions the legitimacy, not only of the physical lines drawn on the ground but also those drawn between race, class and sexual orientation. He draws a parallel between our eroded commons and the commons of the internet, mobile phones and media. He uses animal as totems and themes, from witches and female strength with the spider to privilege with the fox. This allows for a hugely diverse, rich and exciting narrative, folkloric, mythological, literary and deeply political. He looks at the ramifications of the way the lines of property have been drawn and shows us what the profits of slavery look like today, laundered in time and land. He develops his subject along the fault lines between past and present, the micro and macro; from the international border fences of Calais to the Great Wall of China. What ever happened to the right to roam?