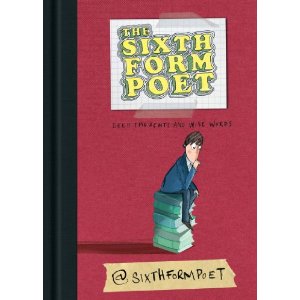 I think the Rorschach family next door look lovely, but my flatmate thinks they look like church-burning Satanists. Weird. I just killed a mouse. It was a copy-cat murder. My friend said he’d give me £100 if I did a bungee jump. I wasn’t falling for that.

Since 2011, the mysterious figure known only as Sixth Form Poet has attracted over 50,000 followers on Twitter with his offbeat, witty and pun-laden observations on modern life.

This collection brings together the best of his pithy one-liners and whimsical poems, brought to life with Tom McLaughlin’s quirky illustrations. Dive into Sixth Form Poet’s world – after all, as he says, ‘It would be so cool if I had lots of fans.’