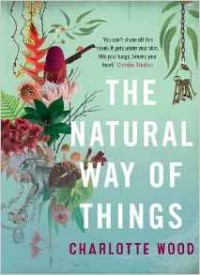 The Natural Way of Things

She hears her own thick voice deep inside her ears when she says, ‘I need to know where I am.’ The man stands there, tall and narrow, hand still on the doorknob, surprised. He says, almost in sympathy, ‘Oh, sweetie. You need to know what you are.’

Two women awaken from a drugged sleep to find themselves imprisoned in a broken-down property in the middle of a desert. Strangers to each other, they have no idea where they are or how they came to be there with eight other girls, forced to wear strange uniforms, their heads shaved, guarded by two inept yet vicious armed jailers and a ‘nurse’. The girls all have something in common, but what is it? What crime has brought them here from the city? Who is the mysterious security company responsible for this desolate place with its brutal rules, its total isolation from the contemporary world?

Doing hard labour under a sweltering sun, the prisoners soon learn what links them: in each girl’s past is a sexual scandal with a powerful man. They pray for rescue – but when the food starts running out it becomes clear that the jailers have also become the jailed. The girls can only rescue themselves.