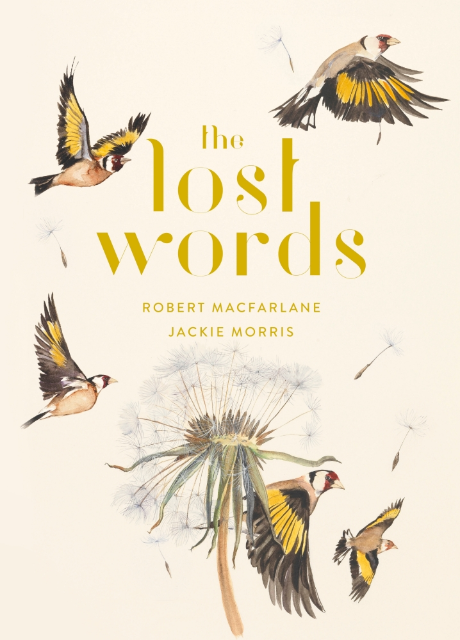 The Lost Words: A Spell Book

The Lost Words is a spell book that seeks to conjure the near-lost magic, beauty and strangeness of the nature that surrounds us, for readers both young and old. Winner of both the CILIP Kate Greenaway Prize and the CILIP Greenaway Shadowers Choice Award in 2019 and shortlisted in 2017 as one of the nations’ favorite books of all time on the natural world (alongside The Wind in the Willows).

Taking the form of twenty ‘lost’ words, collected alphabetically from ‘Acorn’ to ‘Wren’ each word becomes a spell– written by Macfarlane, which is intended to be read aloud. The images – painted by Morris, capture first the absence of the plant or creature within its habitat and then its return. The spell summons the image and the word back into being, making this a book of enchantment in more than one sense.

The virtual world is moving decisively to the centre of modern childhood experience. A 2016 research paper by Cambridge University conservationists found that 8- to 11- year-old school children were ‘substantially better’ at identifying common Pokemon characters than common species of British wildlife. This is not surprising when a 2016 survey showed that three-quarters of British children spend less time outdoors than prisoners do. And while children’s knowledge and experience of nature is being lost, we’re also undergoing a drastic decline of species and habitat in the UK. 53% of species in the UK are in decline, but 52% of the British public are unaware of it.

‘Hope is a greater agent of change than despair’ Macfarlane in the Daily Telegraph.

It is this situation Robert Macfarlane and Jackie Morris seek to address with their unique book, bringing back an experience of nature as astonishing, strange, beautiful, eerie, and magical.

Described as a ‘cultural phenomenon’ in the Guardian, it has become a huge bestseller, has taken root in thousands of schools across Britain, been widely acclaimed as an instant classic, won numerous prizes and given rise to an astonishing array of creative adaptations and responses, from spoken-word, dance and theatrical versions, through to a musical album Spell Songs, a touring show, a major choral work for children, and classical compositions. It was shortlisted in 2017 as one of Britain’s favourite books of all time on the natural world (alongside titles including Tarka the Otter and Gilbert White’s The Natural History of Selborne).It won The Greenaway

Its spells have been sewn into braille, and it has inspired a successful crowdfunding campaign to get a copy of the book into every single primary, secondary and special school in England, Scotland and Wales ( an online map shows which areas of Britain have the book in every primary school).

Eva John has brilliantly written and designed a free-to-download ‘Explorer’s Guide’ to The Lost Words, which is being widely used by teachers and educators across the world. It can be downloaded for free from the John Muir Trust, who have supported the book generously from the beginning of its life.

The book is also powerfully speaking to and being used around the end of life. Campaigns underway to place the book in every care home and hospice in Wales now extending to the whole of Britain.  It is also going into increasing numbers of GP surgeries. And the art and spells are covering three floors of a new London hospital.

Praise for The Lost Words

‘Breathtaking . . . Jackie Morris has created something that you could spend all day looking at’ New Statesman

‘Sumptuous . . . A book combining meticulous wordcraft with exquisite illustrations deftly restores language describing the natural world to the children’s lexicon…The Lost Words is a beautiful book and an important one’ Observer