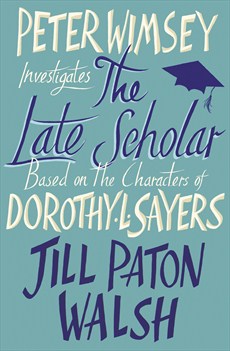 A new murder mystery featuring Lord Peter Wimsey – now a Duke – and his wife Harriet Vane, set in an Oxford college in the 1950s.

Peter Wimsey is pleased to discover that along with a Dukedom he has inherited the duties of ‘visitor’ at an Oxford college.When the fellows appeal to him to resolve a dispute, he and Harriet set off happily to spend some time in Oxford.

And the causes of death of the deceased fellows bear an uncanny resemblance to the murder methods in Peter’s past cases – methods that Harriet has used in her published novels.

The Late Scholar is shortlisted for the Crime Writers’ Association best historical novel of the year.