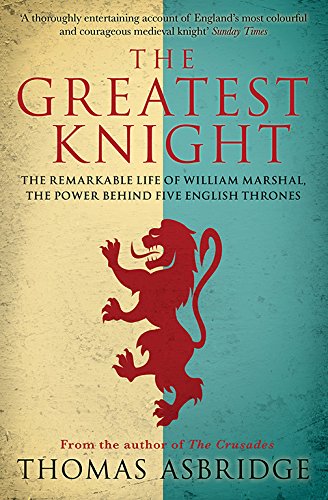 A brilliant new biography of medieval England’s most celebrated knight, William Marshal – providing an unprecedented and intimate view of this age and the legendary warrior class that shaped it.

Caught on the wrong side of an English civil war and condemned by his father to the gallows at the age of five, William Marshal defied all odds to become one of England’s most celebrated knights. Thomas Asbridge’s rousing narrative chronicles William’s rise, using his life as a prism to view the origins, experiences, and influence of the knight in British history.

A leading retainer of four English kings, Marshal served the great figures of this age, from Queen Eleanor of Aquitaine to Richard the Lionheart and his infamous brother John, and was involved in some of the most critical phases of medieval history, from the Magna Carta to the survival of the Angevin/Plantagenet dynasty. Asbridge introduces this storied knight to modern readers and places him firmly in the context of the majesty, passion, and bloody intrigue of the Middle Ages.