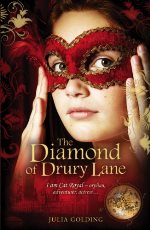 The Diamond Of Drury Lane

`Reader, you are set to embark on an adventure about one hidden treasure, two bare-knuckle boxers, three enemies and four hundred and thirty-eight rioters.’ So writes Cat Royal, ward of the Theatre Royal, Drury Lane, in January 1790. An orphan adopted by the theatre, she lives amongst the most gifted actors and musicians of the age, rubs shoulders with the highest society, and plays in the gutter of Covent Garden with the lowest.

Her life changes when she overhears the theatre owner, Mr Sheridan, discussing the hiding of a diamond of great value in Drury Lane. When caught, she promises that she will protect the jewel and keep it secret. This is no easy task because Pedro Hawkins, a young black violinist she befriends, turns out to have an unhealthy interest in the whereabouts of the diamond. More worryingly for Cat, so does Billy `Boil’ Shepherd, the vicious leader of one of the Covent Garden gangs, and he believes Cat is the key to finding the jewel.

Her task takes her from the refined drawing rooms of Grosvenor Square to the squalor of a cell in Bow Street. On the journey, she discovers that diamonds are not necessarily a girl’s best friend but, rather, a threat to her survival.