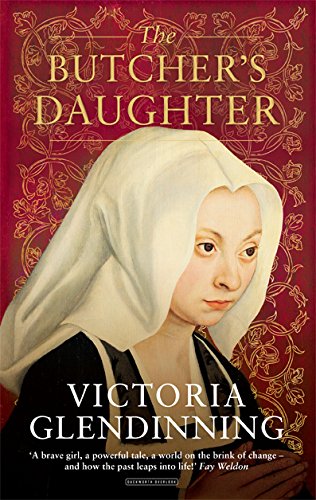 ‘A brave girl, a powerful tale, a world on the brink of change – and how the past leaps into life!’ Fay Weldon

My name is Agnes Peppin and I am a stranger here . . . In this stirring, critically acclaimed and affecting novel, award-winning author Victoria Glendinning intricately depicts the lives of women during the Tudor era. The Butcher’s Daughter is the atmospheric story of a young woman’s struggle to define herself in a world of uncertainty, intrigue and danger.

It is 1535 and Agnes Peppin, daughter of a West Country butcher, leaves her family home in disgrace to live out the rest of her life cloistered behind the walls of the Shaftesbury Abbey. Blessed with a sharp mind, she quickly rises through the ranks of the sisterhood to become the Abbess’s assistant. While Agnes grapples with the complex rules and hierarchies of her new world, King Henry VIII has proclaimed himself Head of the Church of England. Religious houses are being formally subjugated, monasteries dissolved, and the great Abbey is no exception to the purge.

With her place of refuge razed and the sisterhood disbanded, she is free at last to be the master of her own fate. But freedom comes at a price as Agnes descends into a world she knows little about, using her wits and testing her moral convictions against her need to survive by any means necessary . . .