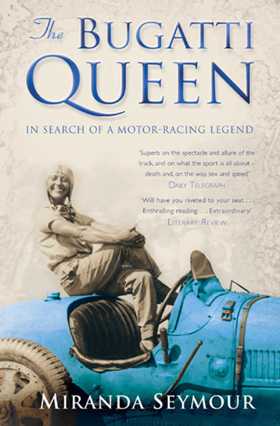 The Bugatti Queen is the extraordinary story of Hélène Delangle, an indomitable and fascinating woman and a pioneer of motorsport who revelled in danger.

Escaping from the tiny French village in which she was born, Delangle headed for Paris in the 1920s where she became a ballet-dancer, and then a stripper. A visit to the Actors’ Championships, a uniquely French meeting of the theatrical world with the race-track, opened her eyes to the glamorous combination of machines and speed and set her on a course for a new and unprecedented career. Driving for Ettore Bugatti, and now known as Hellé Nice, she proved herself a racer of thrilling audacity and talent. She competed in numerous Grands Prix, became the only woman to drive on the treacherous American speedbowls in the 1930s, and set new land-speed records before a notorious accident which almost ended her racing days. Mysterious accusations of collaboration with the Gestapo destroyed her reputation and wrecked her life, but nothing could crush her spirit.

Vivacious, charming and impenitently promiscuous, she was loved by many and hated by a few: one female rival acidly commented that Hélène never thought about anything but `sex and showing off’. With authority and panache, Miranda Seymour reveals the story of an unforgettable life and sheds new light on the extraordinary and reckless world of motor-racing between the wars. The book is beautifully illustrated with many newly discovered photographs of the period.

“…will have you riveted to your seat..” – Literary Review

“…a highly accomplished biography of an extraordinary woman…” – Mail on Sunday