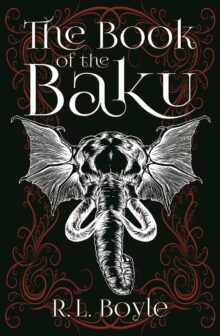 The Book of the Baku

A Monster Calls meets The Shining in this haunting YA dark fantasy about a monster that breaks free from a story into the real world.

Sean hasn’t been able to speak a word since he was put into care, and is sent to live with his grandad, a retired author whom he has never met before. Suddenly living an affluent life, nothing like the world of the estate he grew up in, where gangs run the streets and violence is around every corner, Sean spends his time drawing, sculpting and reading his grandad’s stories.

But his grandad has secrets of his own in his past. As he retreates to the shed, half-buried in his treasured garden, Sean finds one of his stories about ‘The Baku’, a creature that eats the fears of children.

Plagued by nightmares, with darkness spreading through the house, Sean must finally face the truth if he’s to have a chance to free himself and his grandfather from the grip of the Baku.