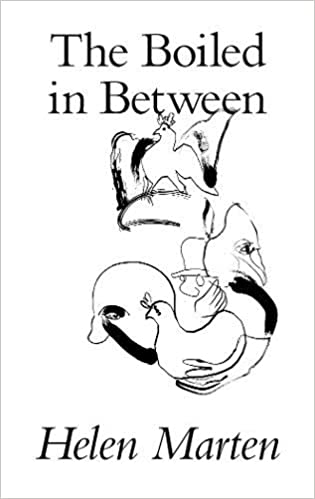 The Boiled in Between

We are the Messrs. The instruments of psychic observation. We are not the moral function of behaviour, neither analyst nor pulse. We are spectator, servant and clown. We are animal, vegetable, mineral. Our flight takes us everywhere. We are interested. We see broken men and women, and cast the spaces in between. We found these two, Ethan and Patrice, and bedded down to watch them squeal.

The Boiled in Between is the debut novel by Turner Prize-winning artist Helen Marten, an ambitious literary work full of beauty and sorrow. It is a novel told in the action of persistence and questioning: how the rhythms of a world built upon metaphor and symbolism can collide with relationships personal and domestic.

Spliced between three voices, the narrative is a project always in movement, its characters traversing the in-betweens. The psychic excitements of wind, dust and weather merge with alchemical interior voices, all of them indexes of the universe’s microscopic pornography, a fitful map of language and human systems. Philosophic and tactile, humorous and unrelenting, The Boiled in Between ignites new meaning for people and terms of living that have long ceased to astonish us.