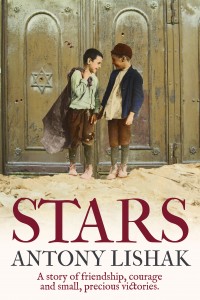 Warsaw, September 1939. For twelve-year-old best friends, Stefan and Marcus, the zoo is their playground. Stefan lives with his family at the zoo and has grown up with the animals and their keepers. But Marcus is Jewish, and when Nazi troops invade Warsaw their world is torn apart. Against all odds and at enormous risk, their fathers devise a wild scheme to protect Stefan’s family and other Jews. But boys will be boys, and a rebellious act of revenge threatens everyone.

Inspired by the fact that hundreds of Polish Jews found shelter in the abandoned cages and underground rooms of Warsaw Zoo, Stars is a story of brotherhood, courage and above all hope in the face of adversity.