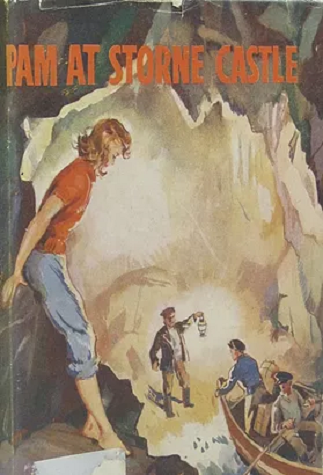 Pam Stewart’s first encounter with Spanish children Pablo and Flores occurs on the deck of an ocean liner returning from Paris. Young Flores is separated from her father and brother, and Pam and best friend Carol Adams help the girl reunite with her family. To Pam’s surprise and joy, she discovers that Senor de Garcia y Rolandes is a business friend of her father’s and is searching for someone to supervise his children while he is away on business. Pam and Carol arrive at Storne Castle, situated on the North Devon coast near Exmoor, and are thrilled at the summertime promise of exercise and adventure. The formidable castle and its dogs are at the girls’ disposal, as are the family’s horses, the rocky bay and the cave nearby. Pablo finds a curiously large footprint in one of the cave’s chambers, and soon the party discovers that it is not alone: young Pablo goes missing, and Pam soon uncovers evidence confirming her worst fear: the boy has been kidnapped.Pam and Carol render Flores into the safe hands of the nuns at a nearby convent, then get down to work locating the villains’ lair. They find this in the form of an abandoned farmhouse across the moor, but it is clear that the men—who also seem to be tied to smuggling efforts through the use of the cave—are too dangerous for two girls to tackle alone. So Pam summons her energetic acquaintances to come and help, and they do not disappoint. Gillian and Hilary soon arrive, with Olive and little Glenda Welland close behind. Their numbers and spirits bolstered, Pam sets about organizing the group and planning a strategic attack. She also presses into service a kindly retired tax inspector, the manager of the town swimming pool, and the resources of the Inland Revenue service to confuse, corral, and ultimately conquer the criminals and return Pablo safely to the confines of Storne Castle.