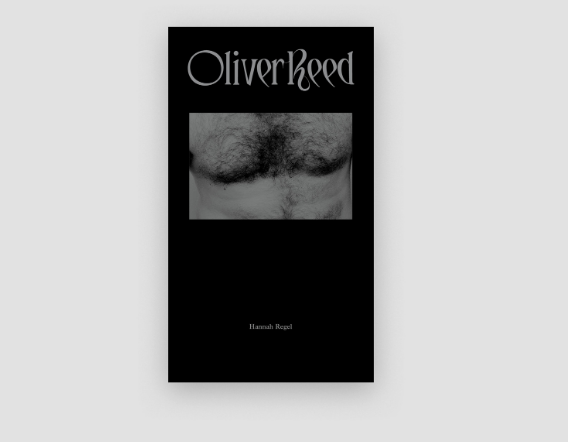 In Hannah Regel’s brilliant collection, Oliver Reed, the figure of the horse becomes an object for language’s brutality and the all too familiar subjugation of women’s voices, bodies, and labour. An impressive hyperbolic pastiche of pleasurable misbehavior guides a girl named Sorry through her own undoing while naming new tools for calculated resistance. ‘Kill the language. Kill it. Get the shovel. We’re making a belt.’ I would gladly do whatever she tells me to do and wouldn’t think of doing otherwise. Regel creates a new order for the ecstatic wreckage of obedience.
– Cassandra Troyan, author of Blacken Me Blacken Me, Growled

Regel doesn’t really sound like anyone. Oliver Reed introduces a poetic sensibility that seems as at odds with convention as it is equal to the moment: fully formed, virtuosic, kind of lethal. These are pitiless, discomforting poems that explore our own creatureliness with a deadly curiosity. Each is a transformation: the actor becomes a strange muse and guiding presence, to ‘smoulder a mobile furnace’; the horse, another of the book’s recurring figures, becomes more than an emblem of eros, labour and suffering; the young girl’s bratty insolence turns defiant and stricken. The voice wills these changes into being even as she ‘wills herself barren’. As much as they trouble and seduce, the poems are also watchful, vigilant – they seem to offer a means of protection. Oliver Reed is an astonishing, masterful first book.
– Sam Riviere, author of 81 Austerities