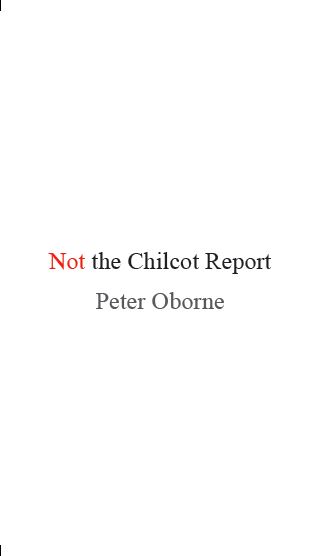 Not the Chilcot Report

In a work fifty times less bulky, acclaimed journalist and commentator Peter Oborne provides a careful, brilliantly argued summary of what should be in the Chilcot Report.

The ‘defining calamity of the post-Cold War era’, in Oborne’s words, took place in 2003. The US-led and UK-backed invasion of Iraq precipitated the collapse of the state system in the Middle East. Iraq is shattered, Syria will never be put back together again, and Lebanon has not functioned as a unified state for a long time. And the great wave of refugees unleashed by this catastrophe is threatening what is left of democracy in Turkey and the very existence of the European Union.

Oborne provides a forensic examination of the way evidence was doctored and the law manipulated in 2002 and 2003 to justify a war for regime change. The government bent facts to fit its determination to join the US invasion, parliament failed properly to scrutinise evidence, the intelligence service was perverted, and the media lost its head.

This is a masterly account of the making of a disaster, written by a passionate British democrat.