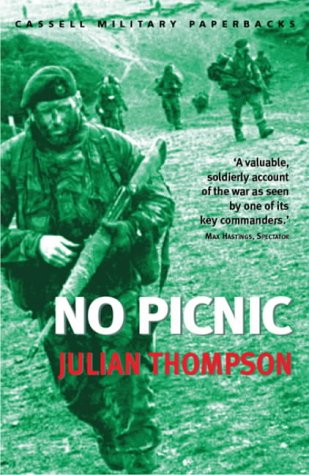 No Picnic: A Firsthand Account of the UK Falklands Campaign in South America

One phenomenon of modern warfare is the instant paperback which appears almost before the echo of the last shot has died away. The recapture of the Falklands Islands was no exception and early versions were in the bookshops weeks before the troops came home. Since then several more detailed and considered accounts of the campaign have appeared and the reader is entitled to ask whether there is anything more to be said. What makes this book different is that it is the first major account to come from one of the fighting participants, and it is written from a unique point of view: Julian Thompson was Commandr of 3 Commando Brigade, which played such an outstanding part in the successful outcome of the campaign. Major-General Thompson, as he is now, vividly describes every stage of the operation, from the moment he was awoken by a telephone call to say that the Argentinians had invaded, to their surrender ten weeks later. He describes with graphic clarity the apparently overwhelming logistical problems, the appalling conditions his men had to endure, and the strategic and tactical decisions facing him and his fellow commanders. The authors command of prose is as admirably controlled as his command of men: he never strives for effect but allows the drama of events to create their own impact. To help the reader follow the action the book contains eight maps. It is also profusely illustrated with photographs, many of which have never been published before. While undoubtedly a work of major interest to the military historian, no reader could fail to respond as the tension mounts and the climax approaches.