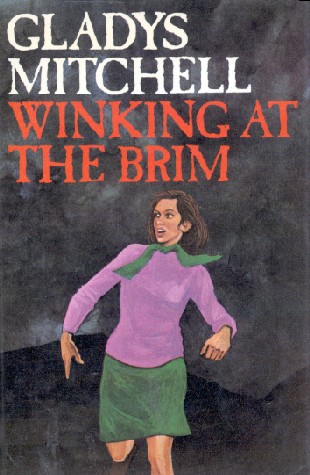 Winking at the Brim

Sir Ferdinand Lestrange’s daughter Sally gets invited to join a monster-hunting expedition. The group–led by publisher and folklore enthusiast Sir Humphrey Calshott–plans to monitor the waters of Loch Tannasg in western Scotland for any signs of a Loch Ness-like creature, and the group members approach their task with varying degrees of seriousness. A pair of twin spinsters hope to indulge their artistic side, while a retired army major and his meek wife simply want a holiday. The Calshott’s daughter Phyllis, Sally well remembers from girlhood experience, has a tendency to prattle, and the unlikeable Angela Barton seems to enjoy spreading nasty insinuations about and among the other party members. Reluctant to be tied down to a caravan containing such aggravating personalities, Sally offers to drive her car up and act as liaison to the three camps. Sally is quite grateful for the freedom her vehicle offers, and between Angela’s gossip and her own observations concludes that some dalliances are taking place. The tranquil loch is also cause for close attention: first Sally, then the twins, briefly encounter the fleeting lake creature. Their news is overshadowed by the discovery of Angela Barton’s wet body in an abandoned house, a suicide note nearby, a wound on her throat, and a thermos of poisoned coffee near at hand. But if the woman tried to kill herself, reasons Sally, why was the note still dry if she attempted first to drown herself in the loch? And why is there no residue of poison in the thermos’ cup? For answers, Sally consults her grandmother, Dame Beatrice, who has an impressive track record for just this sort of problem. Together, Sally, Dame Beatrice, and secretary Laura Gavin interview and investigate until they find a solution, and one which calls upon a final appearance of the Loch Tannasg creature.