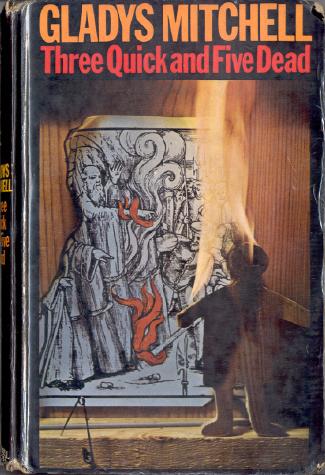 Laura Gavin’s walking companion along a country road situated at the edge of the New Forest isn’t her employer, Dame Beatrice Bradley, but a newly acquired Irish wolfhound named Fergus. The young dog belongs to Laura’s son Hamish, who’s away at school, so Fergus has been staying at the Stone House and has become especially devoted to Dame Beatrice. On the walk, Fergus behaves strangely, then bolts into the woods. An early morning search uncovers dog and something unexpected: the wolfhound is guarding the body of a young woman, Karen Schumann, who has been strangled, and pinned to her chest with a knitting-needle is a piece of paper reading: In Memoriam 325. With the investigation still ongoing, another woman’s body is discovered in the woods, also strangled, another cryptic note attached (In Memoriam 380).

With Dame Beatrice’s input, the police concentrate on three suspects: Edward James, a theology and divinity student engaged to the first victim; Mrs. Schumann, Karen’s mother and, briefly, landlady to Maria Machrado, the second victim; and Otto Schumann, Karen’s quick-tempered sailor brother and Maria’s ex-boyfriend. When a third woman’s body is discovered, her death occurring under similar circumstances, Scotland Yard’s Inspector Maisry works to prevent another tragedy, but he is unable to disrupt the pattern: there is a fourth murder, then a fifth.

Dame Beatrice works with Gavin and Maisry to make sense of the facts. For one thing, each victim, while sometimes not a foreigner, had a different national association: Karen Schumann was German, Maria Machrado, Spanish; other victims were an Italian maid, a French-language schoolmistress, and an Irish nanny. Then there are the notes attached to the bodies, whose numbers may have a historical significance, either as a year date (a.d. 325?) or as day, month and year (3 February, 1905?). Dame Beatrice, who has deduced the murderer’s identity but lacks proof, explains her theory to the police, and the group begins to strengthen its case. Ultimately, it is Dame B. and George who apprehend the killer, thanks to the old lady’s forethought and her chauffeur’s proven reliability in matters of life and death.