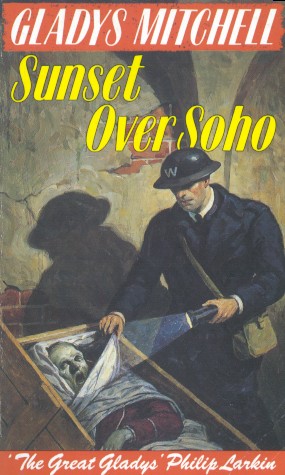 It’s the height of the Second World War, and Mrs. Bradley is working overtime as a doctor at a rest shelter for air raid casualties and displaced persons. With all the present mortality around them, the staff hardly needs another dead body, yet they find one in the form of a two-year old corpse, packed into a makeshift coffin and clothed in a now tattered dressing gown. The dead man’s identity and appearance in the shelter are a mystery; the coffin/crate wasn’t noticed in the basement room on the previous day. Mrs. Bradley realizes that the story really begins in the days before the war, and confides her tale to Detective Inspector Pirberry. David Harben, a young novelist and acquaintance of Mrs. Bradley, spends his summers writing and boating off England’s coast. One dark night a tap at the porthole window reveals a visitor to David’s tub: a beautiful woman whose first words to David are “I’ve killed him.” The boat is moored off the beach near some houses, and upon the woman’s request that David investigate, the writer enters the house and discovers the dead man on the floor. David returns to the boat, hours pass, and when they next visit the house, the body has disappeared. The mysterious woman then leaves David by taking his boat, and when David reclaims it down river, the woman is nowhere to be found. That’s when the attempts on David’s life begin. While David ponders these events, two Dominican nuns and their collection of five orphaned boys enter his life. Mrs. Bradley takes this extended family into her beach house, but during another inverstigation of the dead man’s house, David disappears. The sea recurs throughout this story, and Mrs. Bradley collects such clues as a secretive sailing flag, a talkative parrot, a water-filled cellar, sinister Spaniards, and stories of naval heroics and alluring water-nymphs, clues which help her (and perhaps only her) make sense of this tangled plot.