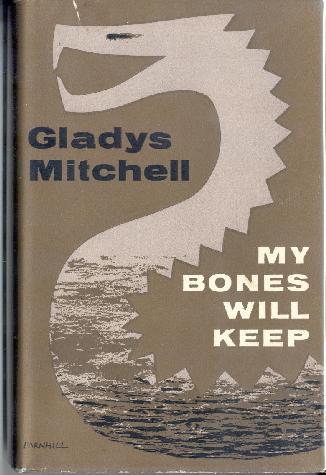 My Bones Will Keep

Laura’s trip to her native Scotland–accompanying Dame Beatrice for a conference, the secretary finds the venture more pleasure than business–begins ominously when she witnesses at Inverness a man thrown into the path of a speeding lorry. A little later, Laura is caught in heavy rain, which cuts short her exploration of Highland scenery. Fate deposits her on the strange island of Tannasgan–Island of Ghosts–and she shares dinner with an even stranger companion, a red-bearded Scot who calls himself Malcom Donalbain Macbeth. Sent to a bedroom after her host requests her company for a week, Laura’s increasing unease with the situation causes her to flee. Making her way to the rowboat that carried her to the island, she is surprised to find another stranger hiding in the boathouse. The pair escape to shore as the sound of bagpipes builds from a dirge to a frenzied reel, then violently, abruptly cuts off.

Laura’s nighttime adventures interest Dame Beatrice strangely, as they learn that the Laird of Tannasgan was stabbed with a skian-dhu, his body chained to a rum barrel and placed in the loch. A young journalist named Grant–the man in the boathouse–dogs the ladies during their investigation, pleading with Laura to offer him an alibi for the murder. It becomes clear that Laura’s host was not the cruel Laird known to many as Cu Dubh–Black Dog–but then what part did he play in the proceedings? The trail leads to a menagerie of carvings on a neighbouring island, but the arresting figures of the werewolf, gryphon, and basilisk there remain silent with their secrets.