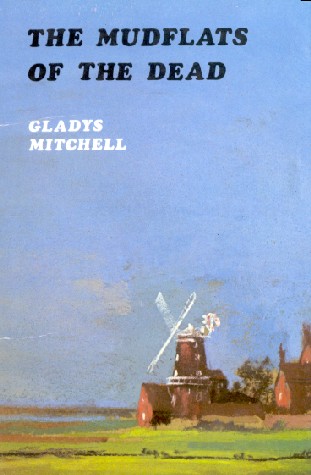 Mudflats of the Dead

Young schoolmaster-turned-author Colin Palgrave seeks inspiration for his second novel among the dunes and beaches of Saltacres, where he plans to spend his holiday. He encounters one rather forthright character straight away, and that in the form of 20-year old Camilla Hoveton St. John, a vacationing art student. After some undisguised flirting, Camilla invites Palgrave to stay with her and two others at a beachfront rental, and Palgrave warily accepts. All goes well until the early arrival of the next week’s tenants: Colin is surprised to find Morag Lowson, to whom he was once engaged, with her doctor husband and luggage in tow. The house becomes uncomfortably crowded and, growing weary of Camilla’s amorous advances, Palgrave opts to sleep in his car. Unable to settle into his cramped quarters, he is persuaded by Camilla to join her in an evening swim. A little later, he leaves the young woman in the sea and returns to the house and his makeshift bed. The morning yields an unpleasant discovery: Camilla’s body has washed up on the beach. An inquest determines that the death was accidental, and that the woman had probably been caught in the undertow of an outgoing tide. But what has happened to the unlucky art student’s suitcase? It has disappeared from the rental house, and in reality it must have been removed during the night by one of the occupants. A sightless “mumper” (here, a derelict beachcomber) named the Old Mole provides the answer when he finds the hastily buried case of clothes among the dunes. And who was the figure in white that Palgrave saw on the night of Camilla’s drowning? All of this activity gives the novelist the inspiration he had hoped for; but when the manuscript turns out to contain more truth than fiction, an unamused murderer makes plans to deposit another body among the mudflats.