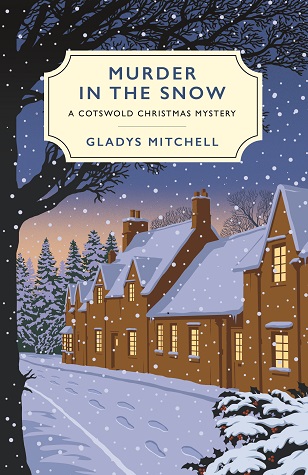 Groaning Spinney/ Murder in the Snow

Mrs. Bradley has decided to spend Christmas with her nephew Jonathan and his wife Deb at their home in the Cotswolds. Upon settling in, the psychiatrist soon hears the story of a local apparition: the ghost of a country parson, it is said, can sometimes be seen at night slung over the gate leading to a grouping of trees called Groaning Spinney. As neighbours and locals visit Jonathan with seasonal greetings (for he has inherited, with the purchase of the large house, the mantle of village squire), Mrs. Bradley learns that the ghostly vicar has been spotted that evening by two travellers. She also makes the acquaintance of Tiny Fullalove, a man to whom Mrs. Bradley takes an immediate dislike. She fares better with Tiny’s brother Bill, a capable countryman named Will North, and farmhand Ed Brown, who has a knack for befriending and taming wild animals, particularly birds.

After the holiday, various villagers begin to receive anonymous letters carrying accusations and insinuations against themselves and others. The first letters are handwritten, subsequent ones typed. Jonathan points out that their spiteful content usually springs from a kernel of truth; e.g., a note detailing an affair between Tiny and Deb seems to elaborate upon an unwelcome pass Tiny had made previously. In the midst of this, and after a particularly heavy snowfall, the body of Bill Fullalove is found, slumped over the woodland gate in a morbid imitation of the parson’s demise a century before.

As Mrs. Bradley theorizes upon the source of the poison pen letters, she makes the acquaintance of the Inspector assigned to the suspicious death and pesters him into exhuming the recently interred body. Another discovery reveals itself with the winter’s thaw: the body of a woman, housekeeper to the Fullaloves, is found on the hillside, where it was buried for weeks under deep snow. The finding of dog collars and leads stuck into a rabbit hole provides for Mrs. Bradley further proof of her theory, and as she gets into riding dress to accompany her nephew on a fox hunt, she sets a trap that will flush out the guilty party and run it to ground.