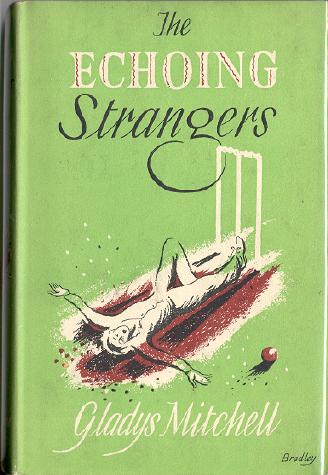 Mrs. Bradley first meets seventeen-year old Francis Caux when she witnesses him push his guardian into a river. The teen is a sullen deaf-mute who has lately been behaving strangely. Normally an enthusiastic swimmer, Francis has recently been avoiding the water, refusing to go near the river or the boathouse.

Pairing Francis with her grand-nephew Godfrey Lestrange, Mrs. Bradley’s artistic encouragement of the quiet boy yields a surprise. Francis shapes modeling clay into the figure of a man and places the figure under a toy boat. The psychiatrist correctly interprets the grim demonstration, and police find the body of a neighboring lodger chained to the underside of the boathouse’s dinghy.

Meanwhile in the village of Mede, Sir Adrian Caux is advertising for a teacher who would make a good cricket player first and a tutor for his grandson Derek second. He finds such a person in Tom Donagh, an amiable Irishman who’s promptly recruited for the cricket match against Bruke, Mede’s village rival. Spirits and tempers run high during the game, and both teams play to win. Shortly after Sir Adrian sends Derek back to the house, the Bruke captain is found in the changing room, his head smashed in with a cricket bat.

As Mrs. Bradley looks into this second murder, she befriends Tom Donagh and they soon learn the story of Francis and Derek Caux. The twins were separated at the age of seven when their parents died in an auto accident. Sir Adrian took custody of Derek, assigning a guardian to the deaf and dumb Francis, and the two boys grew up kept apart fom each other, Sir Adrian barely acknowledging Francis to his brother. But Mrs. Bradley suspects the teens are closer than they appear, and she soon has to consider the disturbing possibility that they may be conspirators in murder.