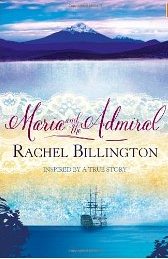 Maria and the Admiral

Valparaiso, June 1822. Thomas Cochrane has led the Chilean fleet to victory, and as the news spreads of the country’s independence from Spain, a British woman, Maria Graham, watches from her house near Valparaiso Bay. A vivacious and clever young widow, her first thought as she contemplates her compatriot’s arrival is that her loneliness has come to an end.

Lauded in the press, and admired by Napoleon, Cochrane had long been at odds with the Admiralty, who failed to subdue his outspoken independence. In Maria Graham he meets a woman whose intelligence and spirit of adventure match his own.

Based on a true story, Maria and the Admiral vividly imagines the intensity of Maria and Thomas’s first meeting and their parting in Rio de Janeiro ten months later, in March 1823. Against the backdrop of one of the most beautiful and remote cities on earth, caught between the Pacific and the snow-capped Andes, this is the story of two exceptional people whose lives are joined before being torn apart by family ties, natural disaster and war.