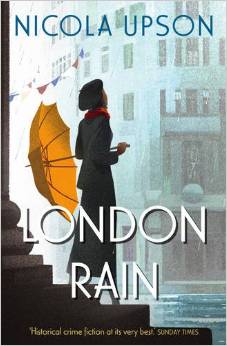 Bestselling writer Josephine Tey is in town to oversee a BBC radio production of her play, Queen of Scots – but adultery, treachery and pent-up jealousies stalk the corridors of Broadcasting House.

At the height of the Coronation celebrations, Detective Chief Inspector Archie Penrose is called in to investigate the murder of one of the BBC’s best-known broadcasters. A second victim – his mistress, and the play’s leading actress – suggests that the motive lies close to home, but Josephine suspects that the killings are linked to a decade-old scandal.

With Archie’s hands tied by politics, and his attention taken by another, seemingly unrelated death, it is left to Josephine to get to the truth. As her relationship with Marta Fox reaches a turning point, she is forced to confront at first-hand the deadly consequences of love, deceit and betrayal.

Rich in the atmosphere of coronation London and the early days of Broadcasting House, the sixth novel in Nicola Upson’s ‘Josephine Tey’ series sets an audacious, deeply personal crime against the backdrop of one of the most momentous days in British history.

‘Historical crime fiction at its very best.’ – The Sunday Times

‘It was a moment of inspiration when Nicola Upson settled on Josephine Tey, one the finest writers of classic detective fiction, as the heroine of her own mystery novels… London Rain is the sixth novel in a series which still has a long way to run.’ – The Daily Mail