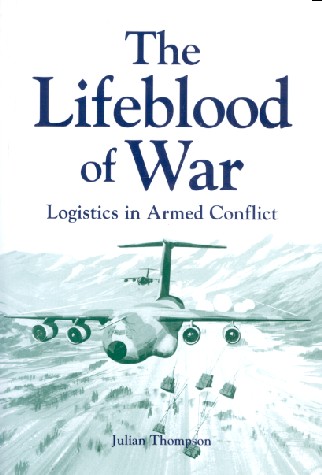 LOGISTICS, the art of movement and supply of troops.

Julian Thompson’s study of the place of logistics in the military campaign uses a number of campaigns to illustrate how the problem of supplying forces has been tackled over the centuries. From the earliest standing army – that of the Assyrians – to the later years of the nineteenth century, warfare was constrained by logistical limitations. As Thompson demonstrates, the advent of the railway and mechanical transportation immeasurably increased operational possibilities, while bringing new problems in their wake.

By examining the changes in logistical operations over selected campaigns, he identifies the essential elements in successful supply and how campaigns have suffered as a result of logistic deficiency. The unpreparedness of the United States before the Korean War and the failures of the French in Indo-China are contrasted with the ‘logistic triumph’ of Burma in the Second World War. Full consideration is given to the techniques of supply; from the sea for Alexander to the air-drops into the Khe Sanh. Thompson, as Brigade commander in the Falklands, brings his unique experience to the description of the maintenance of a land battle at the end of a supply line 8,000 miles long.

Finally the logistic plans for the Central Front war ‘that never was’ are discussed and pointer are given to the future when mobility will be even more important than before.

THE LIFEBLOOD OF WAR is not a book about ‘nuts and bolts’ but an absorbing and highly readable study of principle of practice.