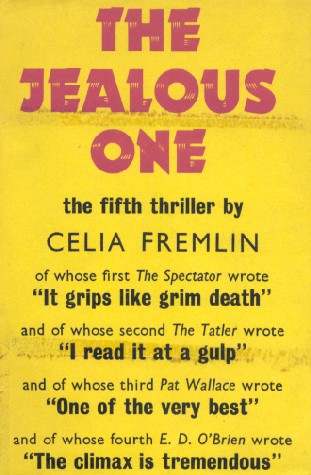 THE JEALOUS ONE was first published in 1965. In it Celia Fremlin rose to new heights of tension, and greater depths of mystery and ice-cold menace, than ever before. Impending tragedy, born of jealousy, grows with the relentlessness of Greek drama – accompanied by the suspense and sickening fear of an early Hitchcock thriller.

Rosamund was pleased to discover her temperature was nearly 102 degrees. Surely that seemed to account for her blinding headache and even to explain the weird, delirious dream in which shed murdered her all too seductive neighbour, Lindy. A great relief to discover the dream was a result of a fevered imagination. And then her husband exclaimed, “Rosamund! Have you any idea whats happened to Lindy? Shes disappeared!”

‘There is only one Celia Fremlin, an artist who distils into words the anxieties and even the terrors which arise in everyday life.  Here we have a nice married couple…whose new neighbours include a young weasel woman.  Deliberately she takes over the bewitched husband.  The only solution to her destructiveness would seem elimination – and she disappears.  No one but Miss Fremlin could weave these time-old elements into a story of such impact.’   New York Herald Tribune
‘I’ve no doubt…that THE JEALOUS ONE will be on the [New York Times’ best-of-year] list for 1965…You have a tense situation, ultimately resolved by a beautifully fitting plot-twist.  Even more memorable than the suspense story is the witty and acute comedy.’  New York Times
‘There is a sense of foreboding and disaster building up in the heroine and the reader simultaneously…Marvellously English, the novel will have a special appeal for the American reader…the climax is definitely last pagish.’  Ada Evening News

‘Tautly written in the first person is a brilliant example of the psychological thriller.  The little worm of jealousy devours its way into the mind, gradually, page by page…[Fremlin] has used these human emotions to produce a memorable book.  I could not put it down until the surprise twist at the end eased the brilliantly constructed tension.’  Hampstead & Highgate Express