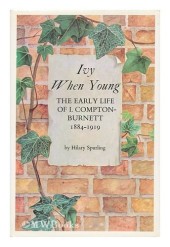 “Ivy was the seventh of 13 children, the firstborn of her father’s second marriage; of the 13 children there were to be eight unmarried daughters – primarily as a result of the War, which more than decimated an entire generation of young Englishmen. (Though hostile to marriage in later years Ivy seems to have hoped for marriage when young.) There were also three suicides in the immediate family. Ivy’s mother was a vigorous, highly attractive and self-willed woman (it was she who added the hyphen to her husband’s name, making herself Mrs. Compton-Burnett) who was evidently a manic- depressive. Early on, Ivy learned to hide what Miss Spurling characterizes as her ”inner tumult” behind a ”calm front.” A shrewd, watchful, reserved child, she had no affection for her older brothers and sisters, and developed a powerful emotional bond with her two younger brothers.” – Joyce Carol Oates in The New York Times