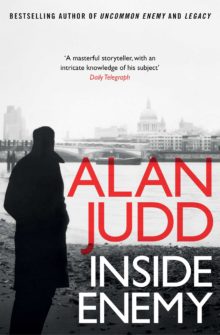 Charles Thoroughgood is now the recently-appointed chief of a reconstituted MI6, married to his predecessor’s widow and tasked with halting the increasingly disruptive cyber attacks on Britain, which are threatening government itself and all the normal transactions of daily life – not to mention a missing nuclear missile-carrying submarine. At the same time another aspect of Charles Thoroughgood’s past emerges with the murder of one of his former agents and the escape from prison of a former colleague turned traitor, whom Charles Thoroughgood had helped convict. Charles Thoroughgood ploughs a lonely furrow in Whitehall in his belief that all these elements are connected, a theory which dramatically gains credibility when his wife, Sarah, is kidnapped.