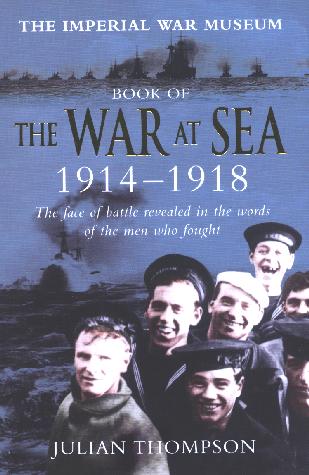 Based on gripping first-hand testimony from the archives of the Imperial War Museum, this book reveals what it was really like to serve in the Royal Navy during the First World War. It was a period of huge change – for the first time the British Navy went into battle with an untried weapons system, dreadnoughts, mines, submarines, aircraft and airships.

Officers and men, from admirals down to the youngest sailors, faced the same dangers at sea. They all confronted the ever-present prospect of being blown to pieces or choking to death, trapped in a compartment or turret as they plunged to the bottom of the sea. In their own words they share their experiences, from long patrols and pitched battles in the cold, rough water of the North Sea to the perils of warfare in the Dardanelles; from the cat-and-mouse search for Vice-Admiral Graf von Spee in the Pacific to the dangerous raids on Ostend and Zeebrugge. We see what it was like to spend weeks in the cramped submarines of the period, or to attack U-boats from unreliable airships.

Mixing insightful narrative with many never-before-published stories, Julian Thompson has written a compelling history of the Royal Navy during the First World War that pays tribute to the men who fought, and sometimes, died, for their country.

“Apart from the Battle of Jutland (which tends to be regarded as a half- cocked engagement), the horrors of the Western Front have eclipsed the Navy’s involvement in the first world war. Drawn from first-person accounts recorded for the Imperial War Museum, this terrific book gives the lie to that. Thompson takes us through North Sea patrols, the nightmare Dardanelles campaign, hunting Von Spee in the Pacific, raids on Ostend and Zeebrugge, and the frankly unnerving development of a naval air arm and the terrifyingly primitive submarines. The voices of those who served bring both an immediacy and an excitement not usual in history books.”  David Mills, The Sunday Times