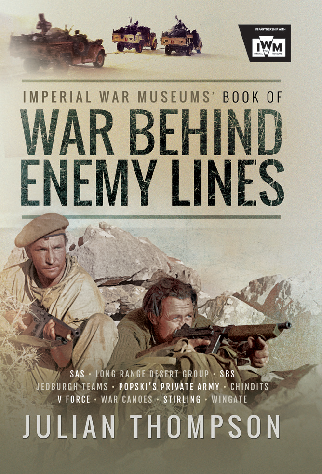 The Second World War has been described as the Golden Age of British Special Forces.  Certainly never before nor since have so many ‘private armies’ flourished: the Long Range Desert group (LRDG), the SAS, the Special Boat Sections and Squadron, Chindits, Popski’s Private Army, and Jedburgh Teams to name but a few of the many units who operated behind enemy lines in every theatre of operations.

This book tells the story of British Special Forces in the Second World War as seen by the soldiers, and some sailors, who served in the array of units which sprang into existence after the fall of France in 1940, in their memoirs, diaries, letters, reports, and taped interviews.

They tell of the LRDG which, from its early days in North Africa through to the end of the war in the Adriatic, spent longer behind enemy lines than any other unit.  The skills the LRDG imparted to David Stirling’s SAS in their early operations together set them on the road to the prestige which they rightly enjoy to this day.  ‘Paddy’ Mayne of the SAS personally destroyed more aircraft than any British or American fighter ace in the War.  The SAS went from the desert to operate behind the lines in Italy and France.  The canoe and small boat operations by the Special Boat Sections, the Special Boat Squadron, and Royal Marines units inflicted great damage on the enemy at small cost.

The largest force to operate behind enemy lines in the War were the 10,000 men of the Chindits.  The papers of their controversial commander Orde Wingate have recently been acquired by the Imperial War Museum, and the author has drawn on these to describe the friction between him and his seniors; as well as the sufferings endured by his men in Burma who had to contend with malaria and starvation as well as the formidable Japanese.

The career of the colourful Vladimir Peniakoff or ‘Popski’ was not always as smooth as he might have wished, but after many vicissitudes he came into his own using heavily armed keeps in Italy while the Jedburghs, or Jeds, were parachuted in to assist the French resistance and later guerrilla groups in Burma.

As well as the triumphs, the book tells of the frustrations and sometimes disasters that befell those who volunteered to fight what was sometimes a very lonely war far beyond help by the main forces, and often operating at the very edge of what was humanly possible.  The famous Operation JAYWICK raid on shipping in Japanese occupied Singapore harbour, was followed by the tragedy of Operation RIMAU.

The book explains frankly why some operations behind the lines were successful and why some failed, sometimes dismally.  The author’s assessment that these operations must be judged on the basis of ‘return on investment’ is clearly expressed, and provides a new insight into special force operations.