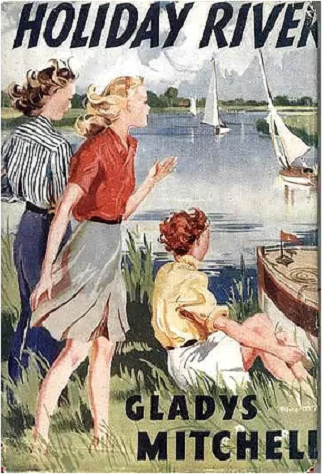 st friends Gillian and Hilary come very close to having their hopes dashed when their fortnight’s holiday among the Norfolk Broads is called off. The clever girls find a responsible parental surrogate in the shape of the slightly older Pam, who agrees to accompany them on the houseboat Buccaneer. As added support, Hilary’s brother David and friend Roger will follow the girls’ progress in a separate yacht, The Saucy Sandboy. And a wizard time is expected by all.

On the train to the Broads, however, the five adventurers encounter an uncouth gang of hooligans, only to spot them again passing in a motorboat once they’re on the water. Curiosity grows when Pam notices the boat, its engine cut, maneuvering around the moored Buccaneer in the middle of the night. The group agrees that the spivs are up to no good (turkey smuggling?), but their surveillance does not go smoothly: first Hilary is kidnapped and locked in a shed, and later the unattended Buccaneer goes missing! The teens are not daunted, and between the quick-to-action boys and the resourceful Pam, the party and the boat are soon reunited. But what of the hooligans’ night-time activities? The holidaymakers won’t rest until they get to the bottom of the mystery.