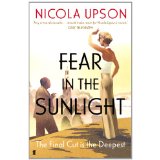 Fear In The Sunlight

Summer, 1936. The writer, Josephine Tey, joins her friends in the holiday village of Portmeirion to celebrate her fortieth birthday. Alfred Hitchcock and his wife, Alma Reville, are there to sign a deal to film Josephine’s novel, A Shilling for Candles, and Hitchcock has one or two tricks up his sleeve to keep the holiday party entertained – and expose their deepest fears.

But things get out of hand when one of Hollywood’s leading actresses is brutally slashed to death in a cemetery near the village. The following day, as fear and suspicion take over in a setting where nothing – and no one – is quite what it seems, Chief Inspector Archie Penrose becomes increasingly unsatisfied with the way the investigation is ultimately resolved. Several years later, another horrific murder, again linked to a Hitchcock movie, drives Penrose back to the scene of the original crime to uncover the shocking truth.

Praise for Fear in the Sunlight

‘Nicola Upson’s Josephine Tey mysteries are a class above the usual crime fiction . . . [She] has researched her heroine, anti-hero, cameo parts, and stage with aplomb to create a novel that charms until the dagger strikes and then, as Hitchcock once explained, it provides the public with beneficial shocks.’  Independent on Sunday.

‘Upson legitimately uses the writer as an avatar to meld a golden-age plot with modern frankness, and Tey’s creative process mirrors her own concerns about blurring fact and fiction. A smart, playful pleasure in an increasingly adventurous series.’  Financial Times

‘Be assured that Fear in the Sunlight is highly engaging and intelligent entertainment’.  Independent.

‘Nicola Upson’s Josephine Tey mysteries have established a reputation for superior pastiches and her latest…is no exception.’  Sunday Express

‘Upson surpasses herself with her mesmerizing and psychologically complex fourth whodunit . . . The melancholy tone and pitch-perfect prose add depth to the sinister plot.’  Publishers Weekly, Pick of the Week (US edition).

‘Beautifully written . . . it is the slow peeling away of the tangled emotions of the people involved that grips the reader and makes compelling reading.’   Lizzie Hayes, Promoting Crime. On the audiobook version, narrated by Sandra Duncan, published by WholeStory.