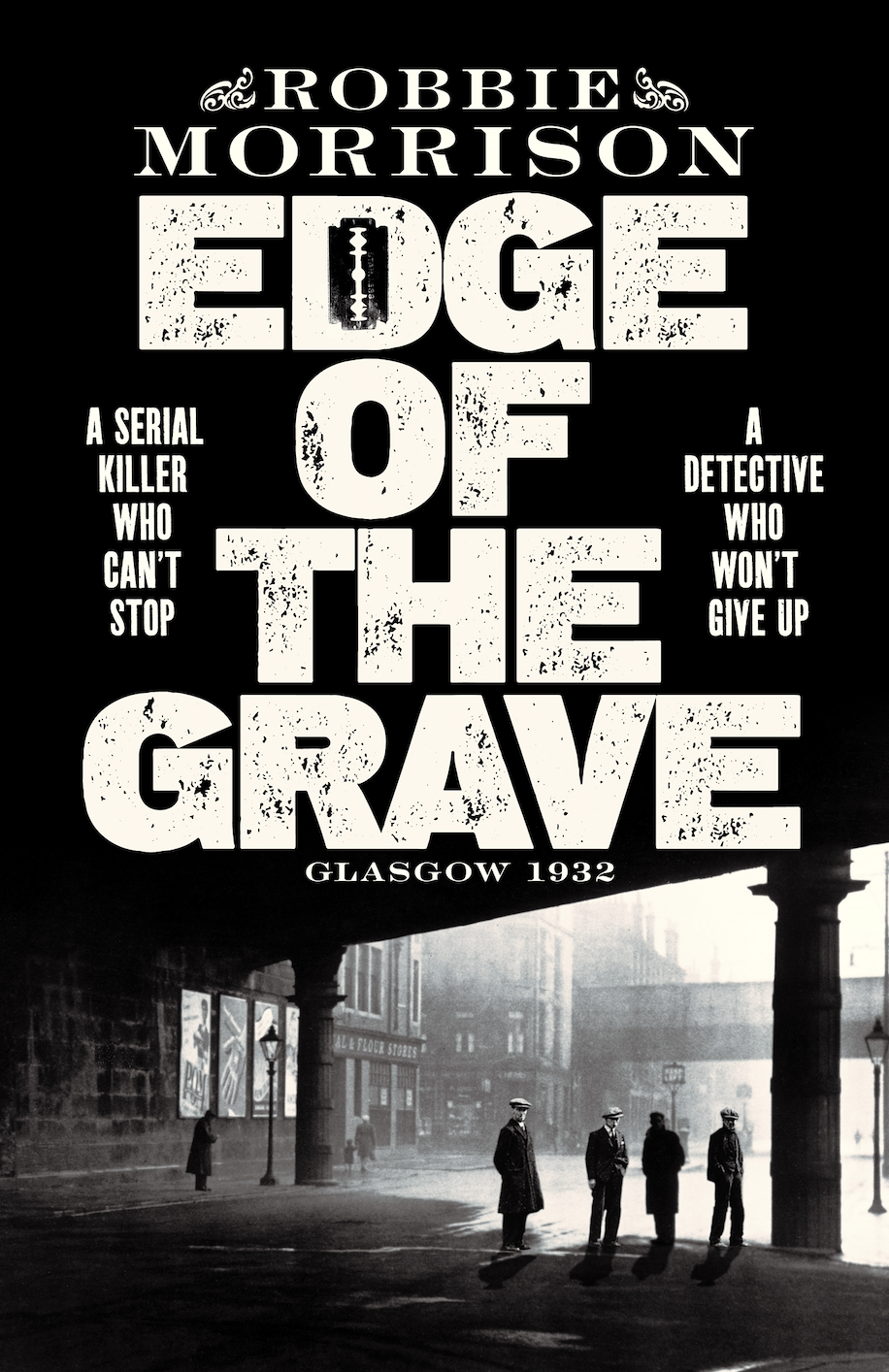 Edge of the Grave (Jimmy Dreghorn 1)

*Shortlisted for The Bloody Scotland Debut of the Year 2021*

Edge of the Grave by Robbie Morrison is a dark historical crime novel set in Glasgow, 1932. A city still recovering from the Great War; split by religious division and swarming with razor gangs. For fans of William McIlvanney’s Laidlaw, Denise Mina and Philip Kerr.

When Charles Geddes, son-in-law of one of the city’s wealthiest shipbuilders, is found floating in the River Clyde with his throat cut, his beautiful widow Isla Lockhart asks for Inspector James Dreghorn to lead the murder case.

Dreghorn has a troubled history with the powerful Lockhart family that stretches back to before the First World War and is reluctant to become involved. But facing pressure from his superiors, he has no choice in the matter.

The investigation takes him and his partner ‘Bonnie’ Archie McDaid from the flying fists and flashing blades of the Glasgow underworld to the backstabbing upper echelons of government and big business in order to find out who wanted Charles Geddes dead and why. As the case deepens, the pair will put their lives on the line in the pursuit of a sadistic killer who is ready to strike again . . .

A magnificent and enthralling portrait of a dark and dangerous city and the men and women who live and die in it. I can’t wait to spend some more time with Jimmy Dreghorn and Archie McDaid. Robbie Morrison has produced an astounding debut — Mark Billingham

Robbie Morrison serves up a delicious slice of 30s gangster noir set in the grim and greasy, sodden and savage streets of Glasgow when it was the Empire’s Second City. Peaky Blinders meets William McIlvanney in this rollocking riveting read — Adrian McKinty, bestselling author of The Chain

A Glaswegian version of Peaky Blinders, with razor gangs brawling in the street and festering family secrets . . . it’s a dark and powerful story ― Sunday Times

Wonderfully gritty, violent and nasty in all the right ways — James Oswald, bestselling author of the Inspector McLean series

The atmosphere Morrison conjures is so captivating it’s hard to believe this is his debut crime novel . . . You should grab Edge of the Grave at the soonest opportunity. This is without doubt the most evocative and engaging Scottish crime novel we’ve come across in a very long time — Crime Fiction Lover

Meticulously researched and dripping with violence, written with brutal panache — Mary Paulson-Ellis, author of Waterstones Scottish Book of the Year, The Other Mrs Walker

Sharp and lethal as a cut-throat razor. Deeply researched, with strong characterisation and a fluent narrative, Robbie Morrison’s first novel is a book to savour — John Harvey, bestselling author of the Charlie Resnick novels

1930s Glasgow portrayed in all its ragged glory — Alan Parks

Robbie Morrison really is a breath of fresh creative air in crime fiction. Edge of the Grave is a stunning debut: razor sharp prose and a superbly crafted sense of place and time. A great Glaswegian page-turner: I could smell the smog and feel the grit throughout — Craig Russell, author of the LENNOX series

The dark heart of 1930s gangland Glasgow is brought back to vivid, violent life in Robbie Morrison’s brilliant first novel. Fast moving and evocative, the prose cuts like a razor, straight through to the heart — Martyn Waites

Powerful and moving . . . Morrison’s portrait of Glasgow and its denizens – both the vicious and the virtuous – is superb ― Literary Review

This deftly plotted novel is a more than worthy successor to William McIlvanney’s Laidlaw novels: the title is a homage to them. I am very glad that this book is the first in a projected series ― Historical Novel Society