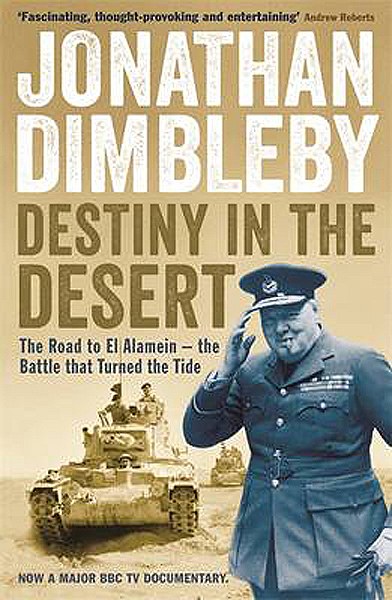 Destiny In The Desert: The Story Behind El Alamein – The Battle That Turned The Tide

It was the British victory at the Battle of El Alamein in November 1942 that inspired one of Churchill’s most famous aphorisms: ‘it is not the end, nor is it the beginning of the end, but it is the end of the beginning’. And yet the true significance of this iconic episode remains unrecognised. In this thrilling historical account, Jonathan Dimbleby describes the political and strategic realities that lay behind the battle, charting the nail-biting months that led to the victory at El Alamein in November 1942.

It is a story of high drama, played out both in the war capitals of London, Washington, Berlin, Rome and Moscow, and at the front, in the command posts and foxholes in the desert. El Alamein is about politicians and generals, diplomats, civil servants and soldiers. It is about forceful characters and the tensions and rivalries between them.

Drawing on official records and the personal insights of those involved at every level, Dimbleby creates a vivid portrait of a struggle which for Churchill marked the turn of the tide – and which for the soldiers on the ground involved fighting and dying in a foreign land.

Praise for Destiny in the Desert

‘By turns fascinating, thought-provoking and entertaining – and always beautifully written – Destiny in the Desert explodes a number of self-serving myths about the Desert War and its apogee, the battle of El Alamein, while letting the reader appreciate why this incredibly story has spawned so many of them. In their place emerges a tale of heroism and sacrifice, told from the point of view of the highest grand strategist down to the lowliest serviceman, which is far more entrancing than any comforting myth. Jonathan Dimbleby lets us see El Alamein anew.’  Andrew Roberts

‘[A] lucid and very well written book . . . Dimbleby’s enjoyable narrative . . . exposes the “Monty” myth for the bunk it is.’  The Independent

‘Extremely well written.  Dimbleby obviously has a passion for his subject, and he tells the story with the confidence of a man who knows the historical terrain intimately.  Anyone who does not yet know about this period of the war could certainly do worse than pick up this book.’  The Financial Times

‘What makes this book so attractive is its crisp and authoritative treatment of the wider context in which this pivotal battle was fought. Dimbleby doesn’t pull his punches in assessing the qualities of the main players Churchill brilliant but brutal, Auchinleck underestimated, Montgomery over-hyped and self-serving. Read this fresh and provocative account and you’ll be in little doubt that this was for Britain the single most critical battle of the Second World War.’ Peter Snow