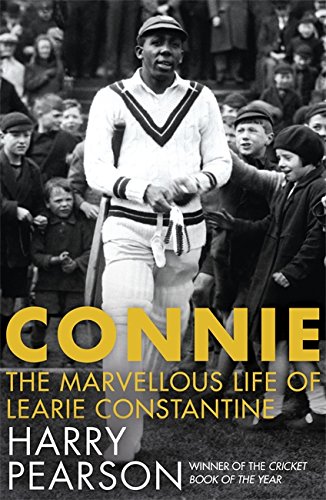 Born in rural Trinidad in 1901, Learie Constantine was the most dynamic all-round cricketer of his age when he played Test cricket for the West Indies and club cricket for Nelson CC. Few who saw Constantine in action would ever forget the experience.

As well as the cricketing genius that led to Constantine being described as ‘the most original cricketer of his time’, Connie illuminates the world that he grew up in, a place where the memories of slavery were still fresh and where a peculiar, almost obsessive, devotion to ‘Englishness’ created a society that was often more British than Britain itself. Harry Pearson looks too at the society Constantine came to in England, which he would embrace as much as it embraced him: the narrow working-class world of the industrial North during a time of grave economic depression. Connie reveals how a flamboyant showman from the West Indies actually dovetailed rather well in a place where local music-hall stars such as George Formby, Frank Randle and Gracie Fields were fêted as heroes, and how Lancashire League cricket fitted into this world of popular entertainment.

Connie tells an uplifting story about sport and prejudice, genius and human decency, and the unlikely cultural exchange between two very different places – the tropical island of Trinidad and the cloth-manufacturing towns of northern England – which shared the common language of cricket.