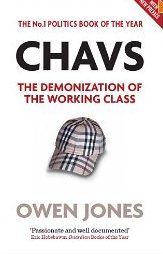 In modern Britain, the working class has become an object of fear and ridicule. From Little Britain‘s Vicky Pollard to the demonization of Jade Goody, media and politicians alike dismiss as feckless, criminalized and ignorant a vast, underprivileged swathe of society whose members have become stereotyped by one, hate-filled word: chavs.

In this groundbreaking investigation, Owen Jones explores how the working class has gone from ‘salt of the earth’ to ‘scum of the earth’. Exposing the ignorance and prejudice at the heart of the chav caricature, one based on the media’s inexhaustible obsession with an indigent white underclass, he portrays a far more complex reality. Moving through Westminster’s lobbies and working-class communities from Dagenham to Dewsbury Moor, Jones reveals the increasing poverty and desperation of communities made precarious by wrenching social and industrial change.

Based on a wealth of original research, and wide-ranging interviews with media figures, political opinion-formers and workers, Chavs is a damning indictment of the media and political establishment, and an illuminating, disturbing portrait of inequality and class hatred in modern Britain.