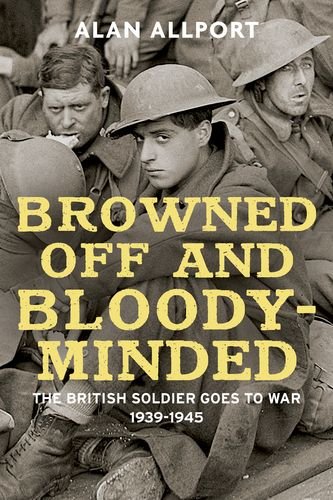 Browned Off and Bloody-Minded

More than 3.5 million men served in the British Army during the Second World War, the vast majority of them civilians who had never expected to become soldiers and had little idea what military life, with all its strange rituals, discomforts, and dangers, was going to be like.

Alan Allport’s rich and luminous social history examines the experience of the greatest and most terrible war in history from the perspective of these ordinary, extraordinary men, who were plucked from their peacetime families and workplaces and sent to fight for King and Country. Allport chronicles the huge diversity of their wartime trajectories, tracing how soldiers responded to and were shaped by their years with the British Army, and how that army, however reluctantly, had to accommodate itself to them.

Touching on issues of class, sex, crime, trauma, and national identity, through a colorful multitude of fresh individual perspectives, the book provides an enlightening, deeply moving perspective on how a generation of very modern-minded young men responded to the challenges of a brutal and disorienting conflict.