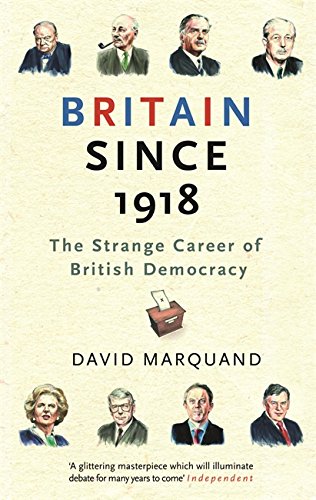 The story of democratic politics in Britain since the coming of universal male suffrage in 1918 is a dramatic one, crowded with events and colourful figures. As well as the great events of war and economic crises, and the quieter drama of constitutional change, this era has been studded with democratic protests of every sort: from the General Strike and the hunger marches of the 1930s, anti-Suez rallies and CND marches in the 1950s, student, feminist and green protests in the 1960s and seventies, the miners’ strike and poll tax clashes of the 1980s, and the anti-Iraq War marches of the early twenty-first century. As well as power and the use of power David Marquand is also concerned with dreams, visions and ideals – such as those of George Orwell and Enoch Powell, Churchill and Lord Salisbury, Aneurin Bevan and Tony Benn – which have helped to shape identity and aspirations. The book closes with the wave of economic and social change, the triumphant capitalism and celebrity culture, of the Blair years.