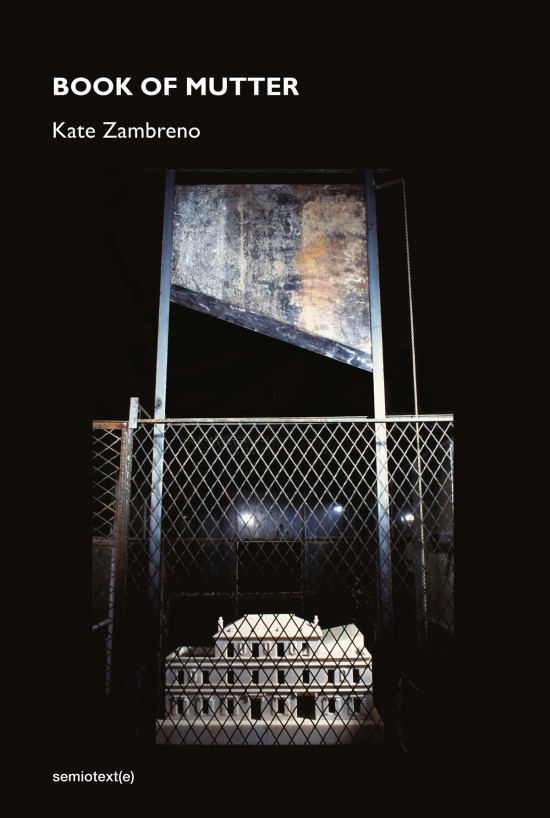 Writing is how I attempt to repair myself, stitching back former selves, sentences. When I am brave enough I am never brave enough I unravel the tapestry of my life, my childhood.

Composed over thirteen years, Kate Zambreno’s Book of Mutter is a tender and disquieting meditation on the ability of writing, photography, and memory to embrace shadows while in the throes—and dead calm—of grief. Book of Mutter is both primal and sculpted, shaped by the author’s searching, indexical impulse to inventory family apocrypha in the wake of her mother’s death. The text spirals out into a fractured anatomy of melancholy that includes critical reflections on the likes of Roland Barthes, Louise Bourgeois, Henry Darger, Theresa Hak Kyung Cha, Peter Handke, and others. Zambreno has modeled the book’s formless form on Bourgeois’s Cells sculptures—at once channeling the volatility of autobiography, pain, and childhood, yet hemmed by a solemn sense of entering ritualistic or sacred space.

Neither memoir, essay, nor poetry, Book of Mutter is an uncategorizable text that draws upon a repertoire of genres to write into and against silence. It is a haunted text, an accumulative archive of myth and memory that seeks its own undoing, driven by crossed desires to resurrect and exorcise the past. Zambreno weaves a complex web of associations, relics, and references, elevating the prosaic scrapbook into a strange and intimate postmortem/postmodern theater.

‘Is it memoir? Poetry? Art criticism? Who cares. So many of my favorite books skirt the question entirely. And in this case, the form — full of gaps and silences, moments of self-questioning and self-revision, and a collage-like layering of confession, memory, and literary, cultural, and art criticism — makes perfect and urgent sense. There’s something both anarchic and incredibly sculptured about Kate Zambreno’s Book of Mutter that gets at the excoriating labor of its undertaking. Part elegy, part inquiry, part archive, part primal scream, this book plumbs the irreducible complexity, eccentricity and unfathomable depth of those women’s lives whose surfaces (like photographs) seem so misleadingly accessible.’ — Suzanne Buffam

‘Kate Zambreno’s Book of Mutter is an intense, original, and fiercely intelligent work. Eschewing the smooth narration of the conventional memoir and its false confidence in the past as a fixed record of truths, Zambreno interrogates her memories of her mother. She circles and prods the pains and pleasures of her child-self. She investigates images and texts, recalled from life and from books, to create a complex web of associations around a woman who has been dead for years, but who lives on as both a secret and a wound. Book of Mutter is that rare text, which dares to face the immense power of the mother.’ — Siri Hustvedt

‘Book of Mutter is an invasive text. Kate Zambreno’s deep attentiveness opens new ways of seeing the work of art in time. Both a tribute to past lives and a philosophy of the present, Book of Mutter is magnetic, heartrending, and visionary.’ — Sofia Samatar

‘“Thinking back through her mothers,” to paraphrase Woolf among them, Zambreno invokes a pantheon of stars: Lincoln, Stein, Leduc, Bourgeois, Sexton, Plath, Akerman, Carson. The parts of Book of Mutter that truly hooked me, and form the bulk of the text, are the passages about Zambreno’s own mother, a woman of mysterious origins, a chain-smoking beauty who died young, in this remembrance composed over thirteen years. Barthes’s mother fixation figures here, as does, somewhat cryptically, the eccentric, Henry Darger, but both are resolved quite spectacularly and surprisingly as Book of Mutter edges toward closure. It is Zambreno’s ear and eye for the sounds and textures of the maternal that most captivate: the rumble of mirrored closet doors on tracks; the snap of a handbag filled with nicotine scented tissues; the collection of silver Clinique lipsticks; the memory of a woman who cleaned incessantly and whose chief deathbed worry centered on the corrosion of those standards of hygiene when, finally, the child, Kate, becomes mother to her mother, one of the many.’ — Moyra Davey

‘The composition of this book requires the reader to participate in constructing links, noticing patterns, and making meaning; it is what Barthes would call a ‘writerly text,’ welcoming the reader into its many entrances and possibilities. Zambreno’s work is an exercise in semiotics, a study of meaning-making, for things that seem intimate, foundational, and basic to being human: history, memory, mother, mourning.’ — Publishers Weekly, (starred review)

‘Above all, Book of Mutter is a work of tone; it expresses a failure to transcend grief, written from a place of guilt and shame, in halting and inarticulate gestures…Writing may not change anything, may not heal or even console—but, like Bourgeois’s Cells, it creates a space in which formlessness, pain and chaos are enclosed and held like holy relics in a church.’ — Jenny Hendrix, Times Literary Supplement